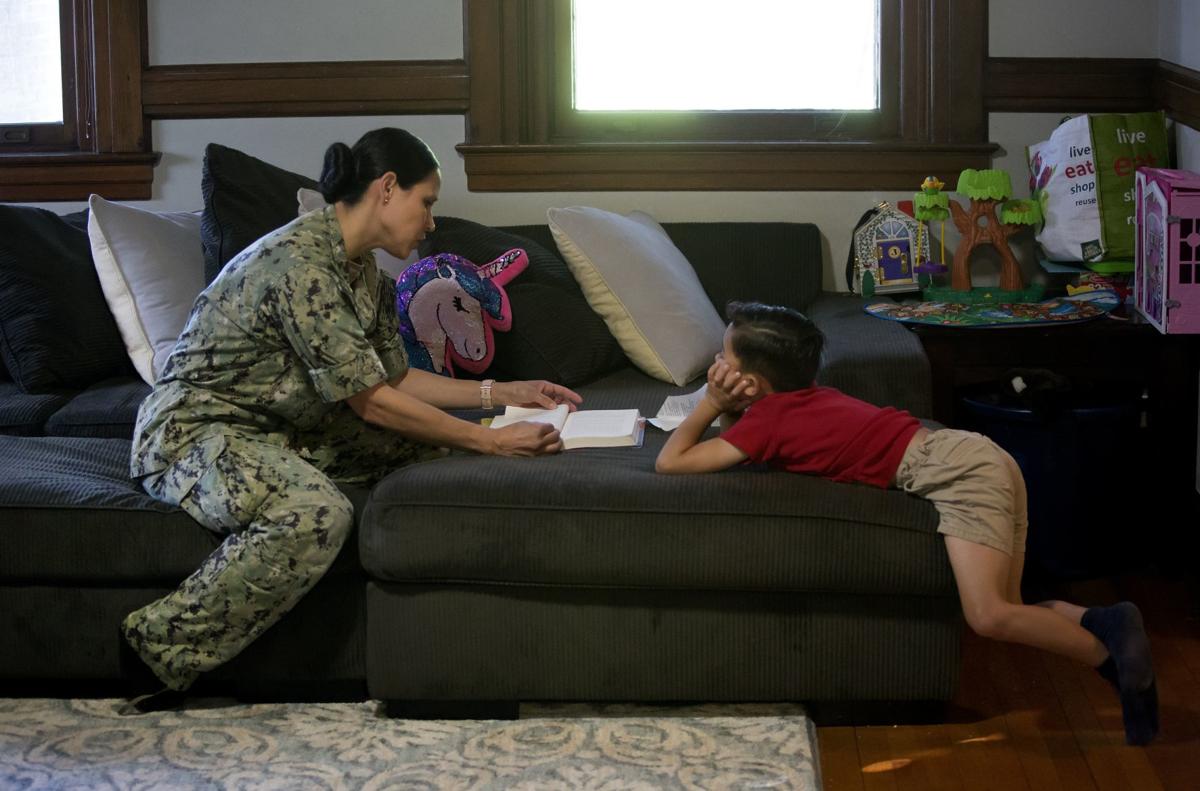 Navy Lt.Cmdr. Karen Sankes-Ritland, the training officer aboard the aircraft carrier Bush, reads to her son, Trevor, 6, for a few minutes before leaving for school Friday morning, May 10, 2019. 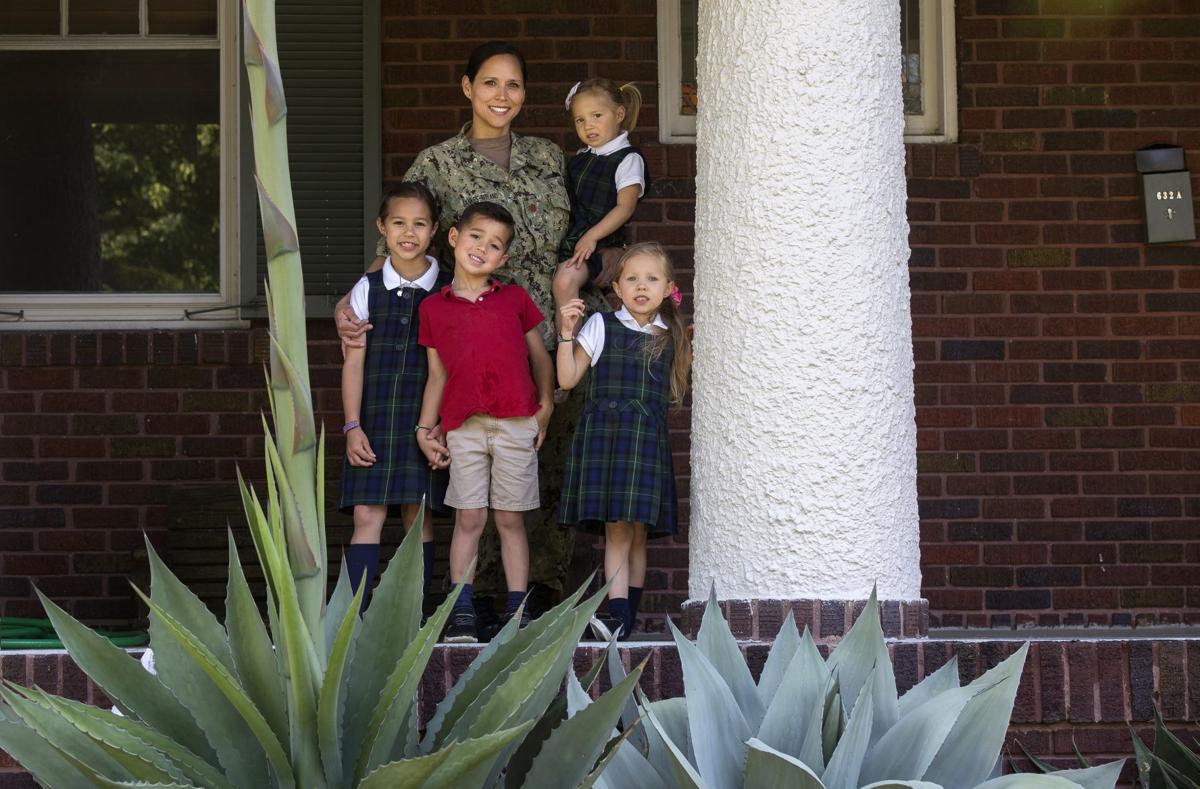 Navy Lt.Cmdr. Karen Sankes-Ritland, the training officer aboard the aircraft carrier Bush, holds her youngest daughter, Kelsey,3, Friday morning, May 10, 2019 on the front porch of their Norfolk home with Kailey,7, Trevor,6, and Kaira,5. 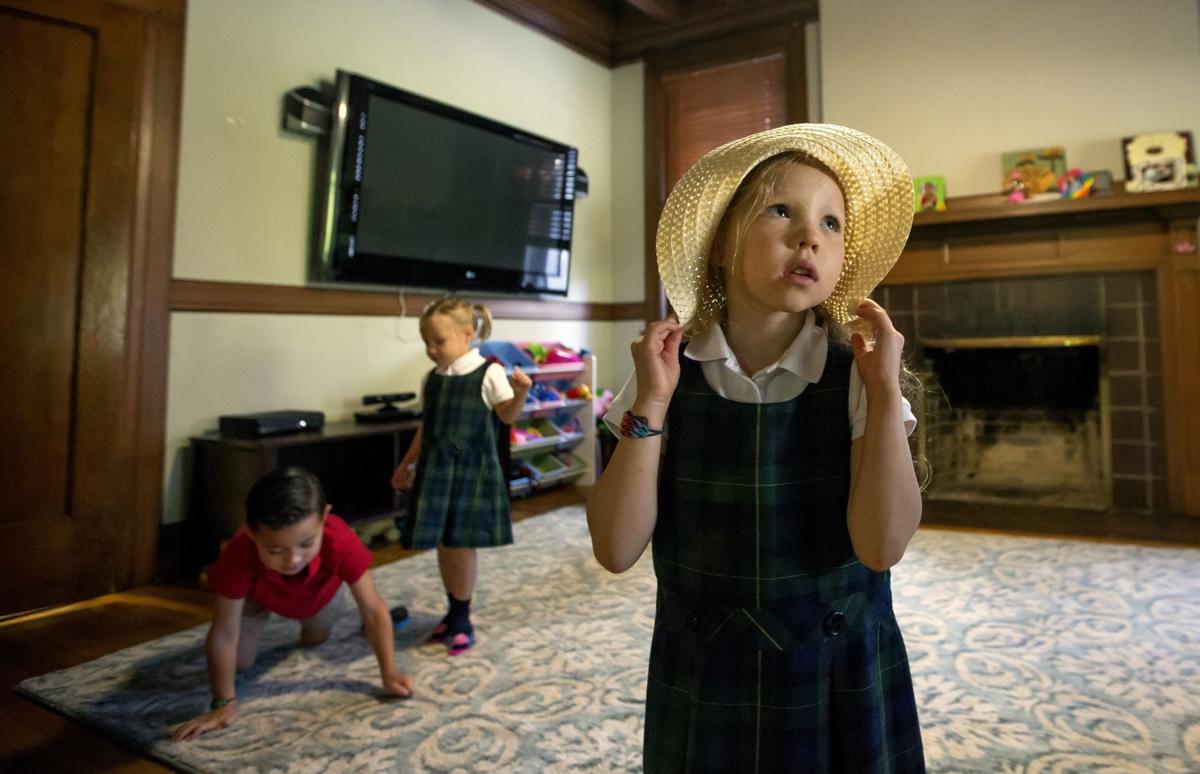 A little playtime in the living room of their Norfolk home Friday morning, May 10, 2019 for Trevor Ritland,6, Kelsey Ritland,3, and Kaira,5, before leaving for school with their mom, Navy Lt.Cmdr. Karen Sankes-Ritland, the training officer aboard the aircraft carrier Bush. 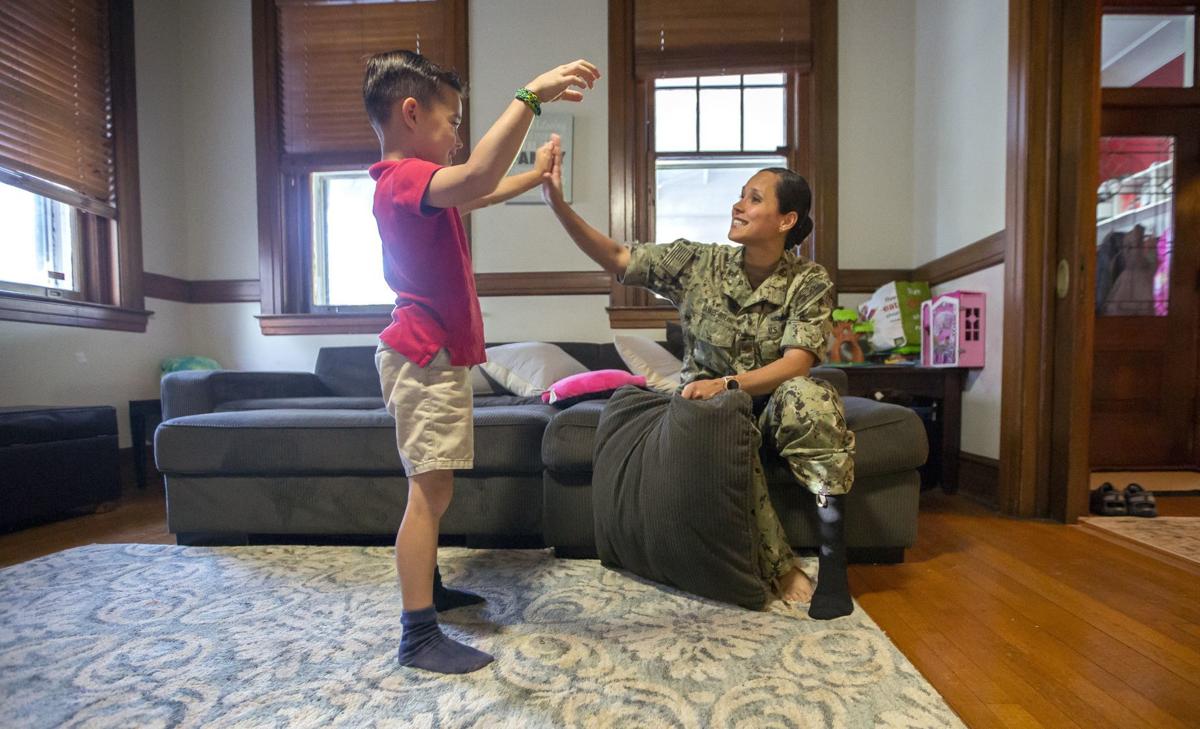 Navy Lt.Cmdr. Karen Sankes-Ritland, the training officer aboard the aircraft carrier Bush, playing with her son, Trevor,6, Friday morning, May 10, 2019 at the family's home in Norfolk before taking her four children to school on her way to work aboard the ship. 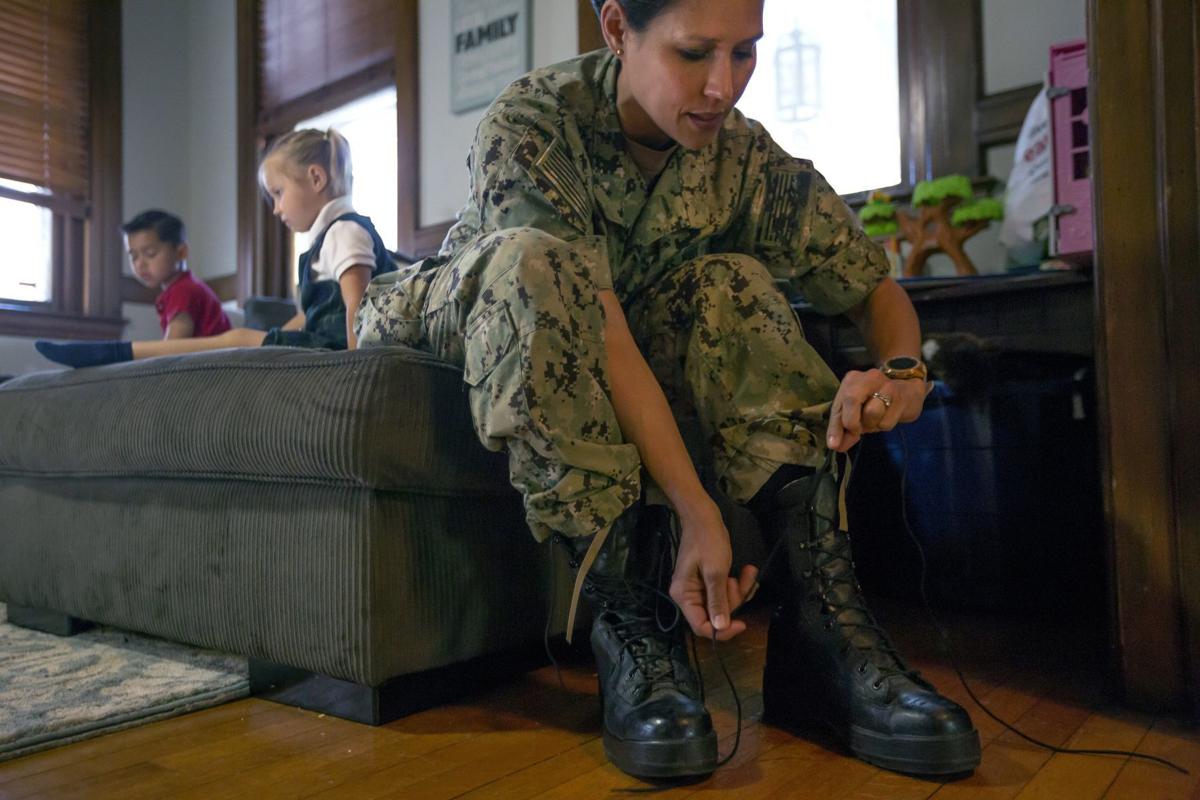 Navy Lt.Cmdr. Karen Sankes-Ritland, the training officer aboard the aircraft carrier Bush, laces up her boots Friday morning, May 10, 2019 at the family's home in Norfolk as she prepares to take her four children to school on her way to work aboard the ship. In the background is her son,Trevor,6, and her youngest daughter, Kelsey,3. 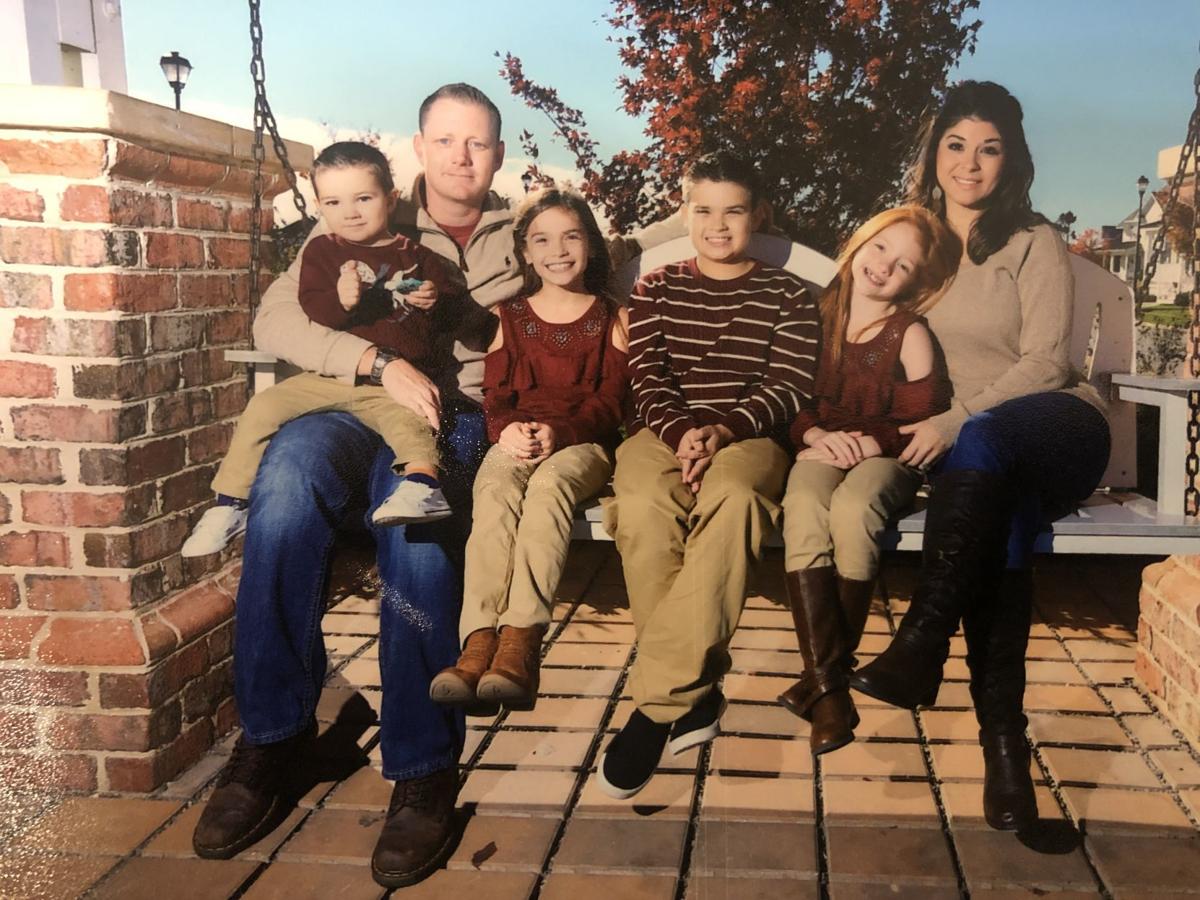 Chief Petty Officer Sheri Bergeman poses for a picture with her family. 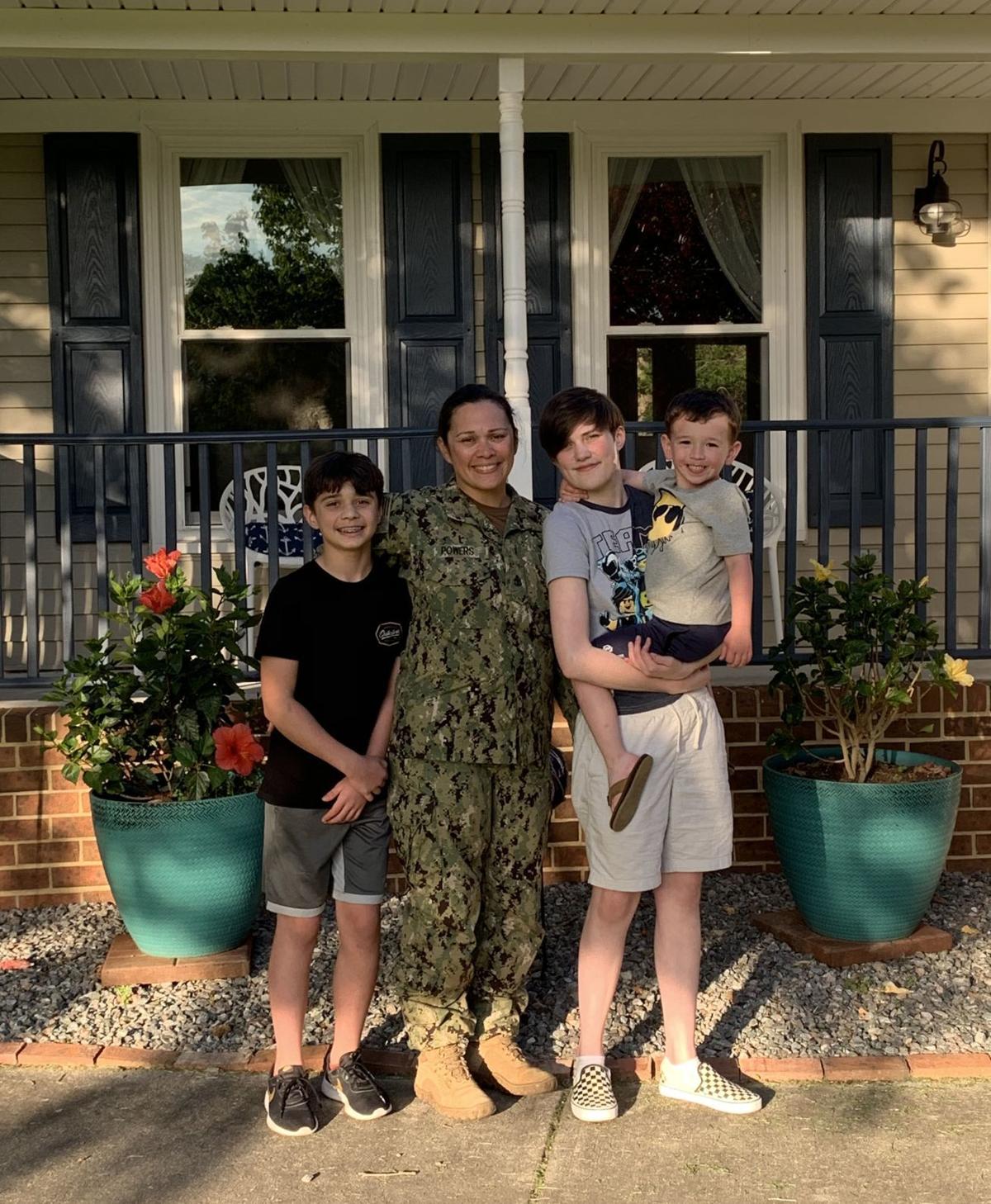 Navy Lt.Cmdr. Karen Sankes-Ritland, the training officer aboard the aircraft carrier Bush, reads to her son, Trevor, 6, for a few minutes before leaving for school Friday morning, May 10, 2019.

A little playtime in the living room of their Norfolk home Friday morning, May 10, 2019 for Trevor Ritland,6, Kelsey Ritland,3, and Kaira,5, before leaving for school with their mom, Navy Lt.Cmdr. Karen Sankes-Ritland, the training officer aboard the aircraft carrier Bush.

Navy Lt.Cmdr. Karen Sankes-Ritland, the training officer aboard the aircraft carrier Bush, playing with her son, Trevor,6, Friday morning, May 10, 2019 at the family's home in Norfolk before taking her four children to school on her way to work aboard the ship.

Her father was a Marine. Her husband is an explosive ordnance disposal officer. She's a Naval Academy graduate.

But more than a decade into her career, the strains of family life and a dual-military household were taking a toll. Her father had recently died, her third child needed open-heart surgery and she was pregnant with her fourth child. Meanwhile, her husband was scheduled to deploy soon.

"I just felt like I was starting to drown," she said.

Something had to change. She needed a break. But she didn't want to leave the Navy.

So after her fourth child's arrival in 2016, she took advantage of a program that lets enlisted sailors and officers take a sabbatical. For a year, she was a stay-at-home mom.

"I will forever be grateful for that year off because that was a very important time for me to be able to spend that time with my very young children," she said. "And I can tell you stay-at-home moms definitely have a really tough job. Very tough, but very rewarding."

She returned to the Navy in 2017 and now serves as the training officer aboard the aircraft carrier USS George H.W. Bush. The time off rejuvenated her. She said it made her a better officer.

"If I had stayed in, I honestly don't think I would be where I'm at right now," she said. "And that's due to needing the ability to take care of my family. And if I can't take care of my personal life, it would be very hard for me to perform in my professional life."

Sankes-Ritland is one of 217 sailors who have used or are using the Career Intermission Program since it was first offered as a pilot program in 2009, with 79 of those choosing to take time off for family reasons that could include having or adopting a child or taking care of an ill parent, according to Naval Personnel Command. Sailors can take up to three years off, but must serve an additional month after they return for every month they've been gone.

The program is one of a series of changes the Navy has recently made to be more accommodating to working parents in an effort to retain talented sailors. Surveys show the top reasons people leave the service are the Navy's impact on the family, on their ability to have or adopt children and work-life balance.

But some working mothers say they've seen a cultural shift over the past 20 years in how leadership treats sailors with children.  A 2018 survey indicated that women planning to remain in the Navy were more likely to have children than those who are undecided or planning to separate from the service.

In recent years the Navy has extended the hours child care is available, doubled its maternity leave to 12 weeks and removed the 40 person cap on the number of people who can go on sabbatical each year. Leaders — many of whom are women with children — are also being taught the importance of making sure those they're in charge of are taking care of their home lives so they're not distracted on a job where lives are at stake. Sometimes, the Navy now says, a family issue needs to take priority.

"The bottom line is that women can be wives, mothers and Sailors all at the same time," said Lt. Cmdr. Jessica McNulty, a spokeswoman for Navy Recruiting Command, which is specifically targeting women to join the service.

Chief Petty Officer Renea Powers, a Virginia Beach-based Riverine with three children ages 17 to 4, said the Navy treated working mothers much differently when she had her first child.

"It wasn't very conducive to women wanting to stay in. A lot of the females around me who were pregnant, like as soon as they had their baby and their time was up, they were getting out," Powers said.

Powers had praise for the extended hours and level of care offered at the Navy's child development centers, as well as how affordable they are. Sailors are charged on a sliding scale based on their pay, but it's not uncommon for sailors to pay half the price for daycare that they would at a comparable accredited private facility.

Powers sends her youngest child to one of the Navy's centers. The only problem is that the centers can't handle more children, she said.  Wait lists to get in are common. Each center maintains low caretaker-to-child ratios and they're limited in how many children they can accept.

The one for Naval Station Norfolk can handle 300 children and is at capacity. The wait list has 300 names on it. The children of active-duty sailors and single parents get priority.

The Navy also offers a 24/7 care program for sailors who work overnight watches. That program can handle 20 children and offers to certify in-home caretakers that may allow children to have more personal attention closer to where they live.

Chief Petty Officer Sheri Bergeman, who works at Fleet Forces Command in Norfolk, was someone who thought about getting out of the Navy after she had the first of her three children. But she stayed in largely because she and her husband still had contracts to serve and she was able to transfer to shore duty. When she had her first two children, she only got six weeks off.

But for her third child, she got 12 weeks.

"It's important to have that additional time for bonding. So six weeks, you're going back to work, you kind of have a little bit of resentment, like 'Oh my gosh, I don't spend this time with my baby.' Your mind is not at work," she said. "You're there, but you're really not focused."

Bergeman would spend her lunch hours at the daycare with her baby. "Because that's where my heart was. That's where my mind was."

For her, the Navy's new extended leave policy also came with another benefit: paternity leave. For her third child, her husband was also able to take time off work and take some of the burden off her.

"You have a baby and you're tired," she said. "You're up all that time. So having them there to be able to care for the baby and, you know, be awake — that's huge."

Since June, the Navy also has offered more flexibility in its parental leave policy by allowing whoever the primary caregiver is to take six weeks off even if it's not the birth parent. It also increased time off for the secondary caregiver from 10 days to 14.

The service "recognizes the diversity of our Navy families," Phillips said. "As our dual-military, dual-income, same-sex and single parent families continue to grow, so must our focus on family-friendly policies."

Bergeman said she'd like to see the Navy help more women who can't have children by paying for in vitro fertilization.

"Right now that's not covered," she said. "I think that would be huge because there are a lot of women that want to have children that can't. I'd like to see the Navy actually support that."

Sankes-Ritland believes the Navy is on the right track. She's especially a fan of the sabbatical program.

"I am a huge proponent of it," she said.

She talks up the program to other women sailors, especially single moms: "I always let them know that there are these opportunities and resources everywhere in the Navy that you can take advantage of."