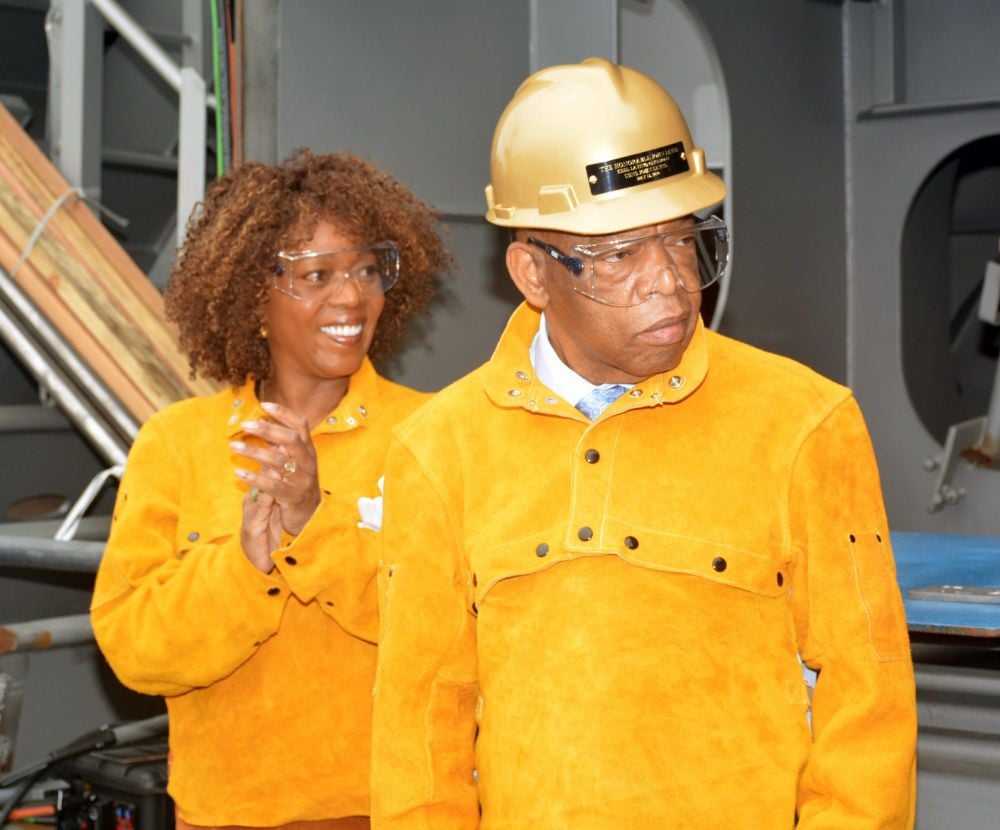 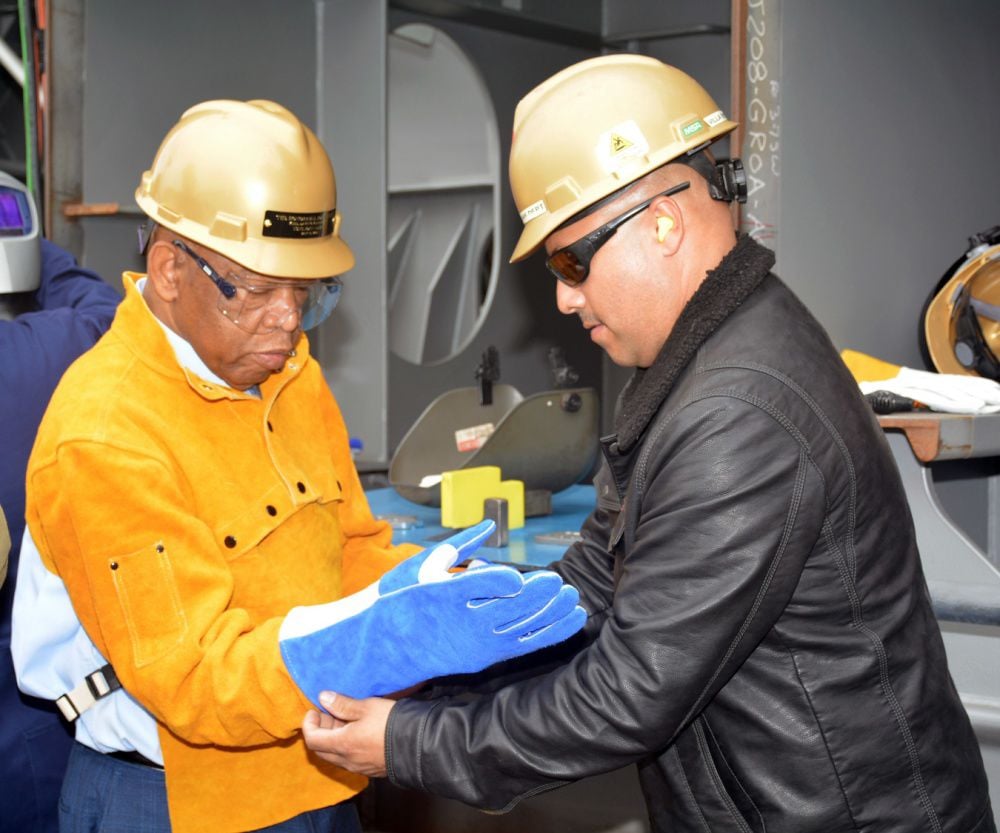 Rep. John Lewis (D Ga.) dons protective gear as he prepares to weld his initials into the keel plate of his namesake ship during the keel laying ceremony of USNS John Lewis at the General Dynamics Shipyard in San Diego. 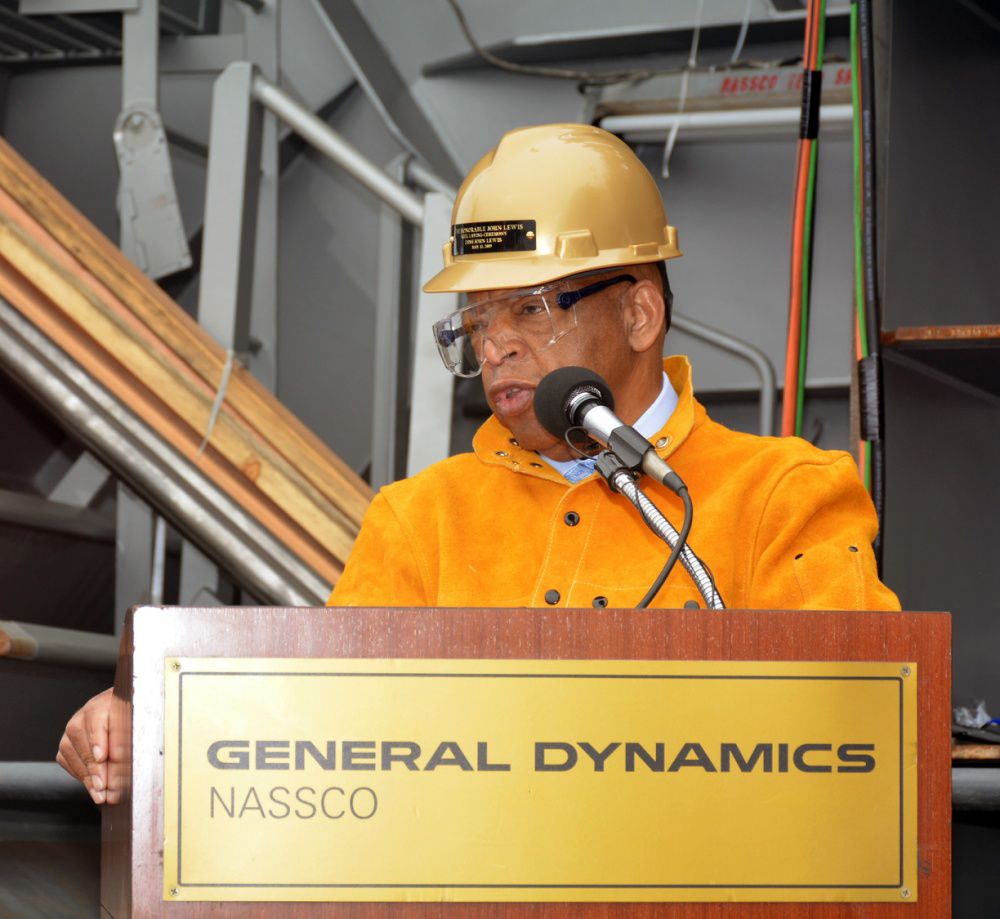 Rep. John Lewis (D Ga.) dons protective gear as he prepares to weld his initials into the keel plate of his namesake ship during the keel laying ceremony of USNS John Lewis at the General Dynamics Shipyard in San Diego.

“I am absolutely thrilled to be here today in the capacity of sponsor to this great ship,” said Woodard in her remarks. “As a leader, John Lewis is a bright light in the service of our country. May this ship be a beacon in times of darkness.”

The time honored tradition of the keel laying, marks the official start of construction of the ship. Part of the tradition is for the sponsor to weld their initials into the keel plate of the new ship. After a few minutes’ instruction, both Woodard and Lewis, dressed in protective equipment, took torches in hand and stepped into the ship’s history. The steel plate with their initials will be permanently affixed to the ship’s keel, remaining with the vessel through its time in service.

“I tried to promise myself that I would not be overcome, but this is too much,” said Lewis.

USNS John Lewis will serve the United States Navy as a replenishment oiler under the control of MSC. The ship is the and the lead ship of her class of 20 perspective ships that will all be in the Lewis class. The ship honors Lewis, a 17 term congressman and a well-known civil rights activist, known for his courage during the civil rights movement of the 1960s. He organized voter registration drives and community action programs during the Mississippi Freedom Summer. He led over 600 peaceful, orderly protestors across the Edmund Pettus Bridge in Selma, Alabama on March 7, 1965, where the group was attacked by Alabama state troopers in a brutal confrontation that became known as "Bloody Sunday." Throughout his life, Lewis has remained a devoted advocate of the philosophy of nonviolence, and continues to advocate for peace throughout the world.

“We need great ships, like this one, to carry our men and women in our continued work for peace, because we are one world,” said Lewis.

Following construction and christening, the ship will go through a rigorous schedule of tests and inspections before joining the MSC fleet of over 120 ships, operating throughout the world.