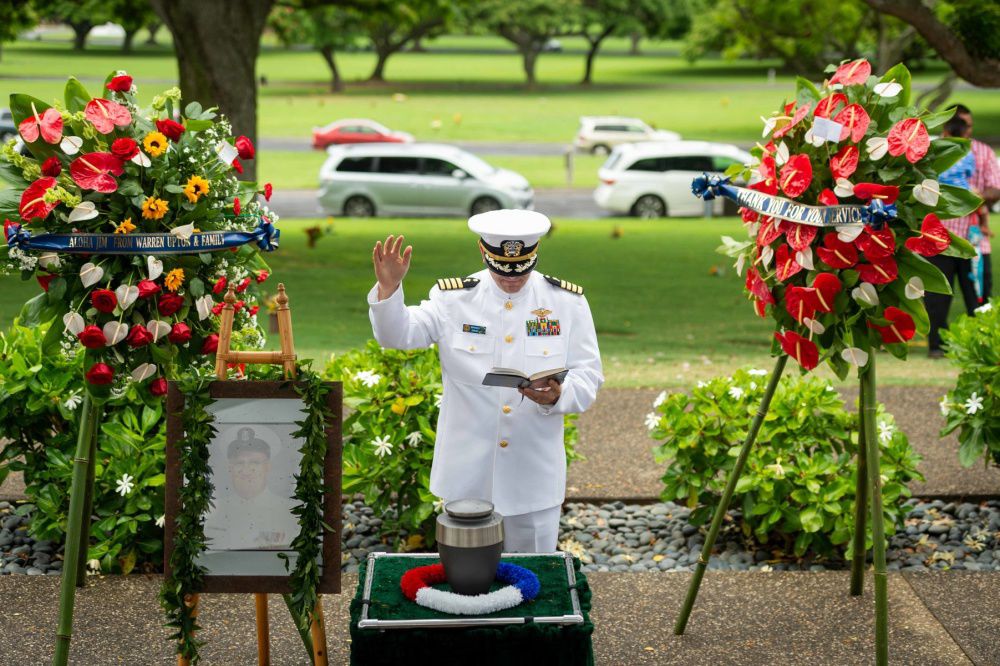 Capt. Brian Haley, a Navy chaplain, gives a speech during Jim Taylor's funeral at the the National Memorial Cemetery of the Pacific, June 27. Jim Taylor was a retired Navy master chief who continued to serve his country as Navy Region Hawaii's volunteer Pearl Harbor Survivor Liaison until his passing on May 20, 2019. 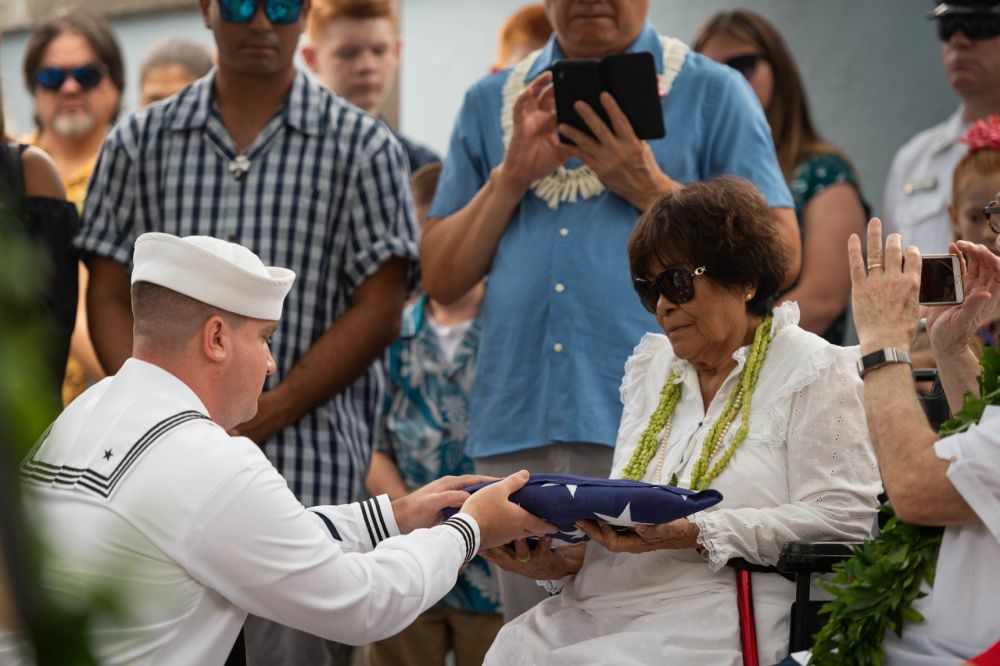 Leonora Taylor, Jim Taylor's wife, is presented an American flag during Jim's funeral at the the National Memorial Cemetery of the Pacific, June 27. Jim Taylor was a retired Navy master chief who continued to serve his country as Navy Region Hawaii's volunteer Pearl Harbor Survivor Liaison until his passing on May 20, 2019.

Capt. Brian Haley, a Navy chaplain, gives a speech during Jim Taylor's funeral at the the National Memorial Cemetery of the Pacific, June 27. Jim Taylor was a retired Navy master chief who continued to serve his country as Navy Region Hawaii's volunteer Pearl Harbor Survivor Liaison until his passing on May 20, 2019.

Leonora Taylor, Jim Taylor's wife, is presented an American flag during Jim's funeral at the the National Memorial Cemetery of the Pacific, June 27. Jim Taylor was a retired Navy master chief who continued to serve his country as Navy Region Hawaii's volunteer Pearl Harbor Survivor Liaison until his passing on May 20, 2019.

Ready. Aim. Fire. Shots from the M4 rifles of Navy Region Hawaii Honors and Ceremonies’ 21gun-salute ring out, echoing through the National Memorial Cemetery of the Pacific (Punchbowl Cemetery). On an overcast day in Honolulu, military honors are rendered as family, friends and guest pay their last respects to one of the iconic figures of the Pearl Harbor region, retired Master Chief Yeoman James “Jim” Taylor, June 27.

Jim Taylor was a beloved son, brother, father, grandfather, great-grandfather, friend and mentor. For 63 years Taylor gave of himself in support of his fellow Sailors, fallen service members and in honoring the wishes of Pearl Harbor survivors, once they passed, to rejoin their shipmates on the sunken ships of Pearl Harbor or at Punchbowl Cemetery. A large portion of his legacy was his family and the work he accomplished as Command Navy Region Hawaii’s (CNRH) volunteer Pearl Harbor survivor liaison.

Taylor’s journey in the Navy began at the age of 17. This was a rather unique age as he required a parent’s signature to join since he was not yet 18. During the chapel service held onboard Joint Base Pearl Harbor-Hickam (JBPHH), Taylor’s brother, Richard, joked that their mother may have been happy to sign, because of some prior decisions Taylor made while growing up.

“I have a feeling, since Jim’s early period was peppered with some incidents as a young man, nothing that the rest of us haven’t experienced I suppose,” said Richard, “But I have a feeling my mother was happy to sign.”

Chuckles filled the chapel at Richard’s shared thought. Reviewing the span of life accomplishments of Jim Taylor, joining the Navy would prove to be one of the cornerstones of his life. Without the Navy he may have never had the opportunity to work at the Navy brig here onboard JBPHH. It was through his position as the assistant officer in charge of the brig that he was able to manage a program helping troubled Sailors adjust to life in the Navy before they got into serious trouble.

Taylor ensured Sailors were exposed to the Navy’s rich history, heritage, and had respect and pride for those who have gone before. Due to the brig’s close proximity to the USS Utah Memorial, Taylor assigned his junior Sailors to conduct morning and evening colors every day and maintain the memorial and surrounding areas. His leadership with these Sailors was yet another meaningful part of his life. As Richard heard the stories and saw the impact of his elder brother, he was enlightened.

“I really had no idea until I came to this occasion, just how incredibly accomplished he was,” said Richard. “I never really appreciated it as much as I do today.”

Jim Taylor’s reach was far and wide. He seemed to have an impact on everyone with which he came in contact. Testimonies and stories to support his life’s work poured out from the mouths of every speaker. Statements like “A Sailor’s Sailor and a chief’s chief” and “A Navy chief with a passion to serve” accompanied the remarks of friends and co-workers. The respect and loyalty Taylor gave and received shined throughout his life and was a testament to the Aloha spirit he always put forth.

Agnes Tauyan, director of public affairs for CNRH, refelected on her 30-year relationship with Taylor. While working at the brig he also served as the region’s Collateral Duty Casualty Assistance Calls Officer (CACO). In this position Taylor would be responsible for providing information, resources, and assistance to the next of kin in the event of a casualty. Tauyan acknowledged this is where Taylor became involved in scattering the ashes of Pearl Harbor survivors.

Taylor’s exposure to the CACO position helped usher him into the legendary work he is known for today and gave way to the position of Pearl Harbor survivor liaison which he held until his passing. It has been noted that Taylor has honored the last wishes of more than 300 Pearl Harbor survivors by scattering their ashes over the waters of Pearl Harbor or laying them to rest at Punchbowl or other cemeteries around the island of Oahu.

From the sentiments shared throughout the service, it was apparent Taylor loved his family, loved his country, loved his Navy, and loved veterans. Jim Taylor’s instrumental role and personal investment in the lives of Pearl Harbor and USS Utah survivors as well as his efforts in the upkeep of the USS Utah Memorial, earned him a title of an honorary Pearl Harbor survivor by the Pearl Harbor Survivor’s Association.

In later years, Jim Taylor continued what he did best and made contributions in the lives of others, passing on his many years of knowledge. Jim Neuman, history and heritage outreach manager at CNRH and successor for Taylor said, “I will never be able to ‘replace’ Master Chief Taylor. His legacy is forever stamped in the lives of each of those veterans and their families.”

Tauyan developed a mantra “Where you go, I go Master Chief,” letting Taylor know he always had support and people by his side as he continued his work. One day before Taylor’s passing, he reminded Tauyan he still had work he wanted to do, but did not believe he would be able to finish. Tauyan responded, “Where you go, I go Master Chief!” To this Taylor replied, “Well then, I will see you in heaven.”

On May 20, 2019, retired Master Chief Yeoman James “Jim” Taylor passed away. The many stories and works accredited to Taylor will live on. As his loving family, friends, and the Navy grieves, and his loss is felt around the country, his brother Richard reminds us why the loss feel so significant, “The greater the good, the deeper the pain.” The amount of good and the works carried out by Taylor will continue.

“We all hope to carry the torch moving forward in the spirit of Master Chief Taylor and ensure all of our veterans are taken care of in life and in death,” said Neuman.

At Punchbowl Cemetery, just before Jim Taylor is laid to rest, there is a parting of the clouds. The greyness of the day is washed away and the golden sunlight fills the landscape. As Sailors say, “Fair winds and following seas. Shipmate the watch stands relieved. Relieved by those you have trained, guided and lead. Shipmate you stand relieved. We have the watch.”