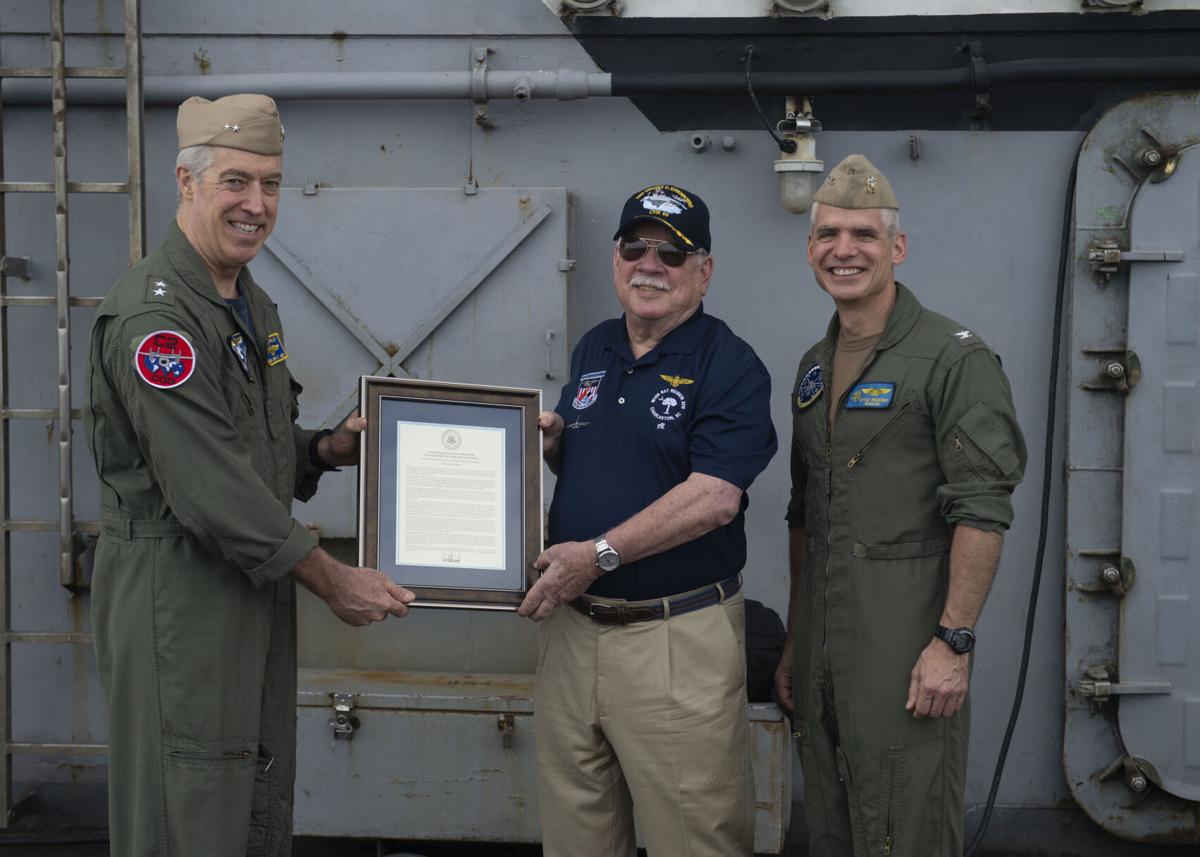 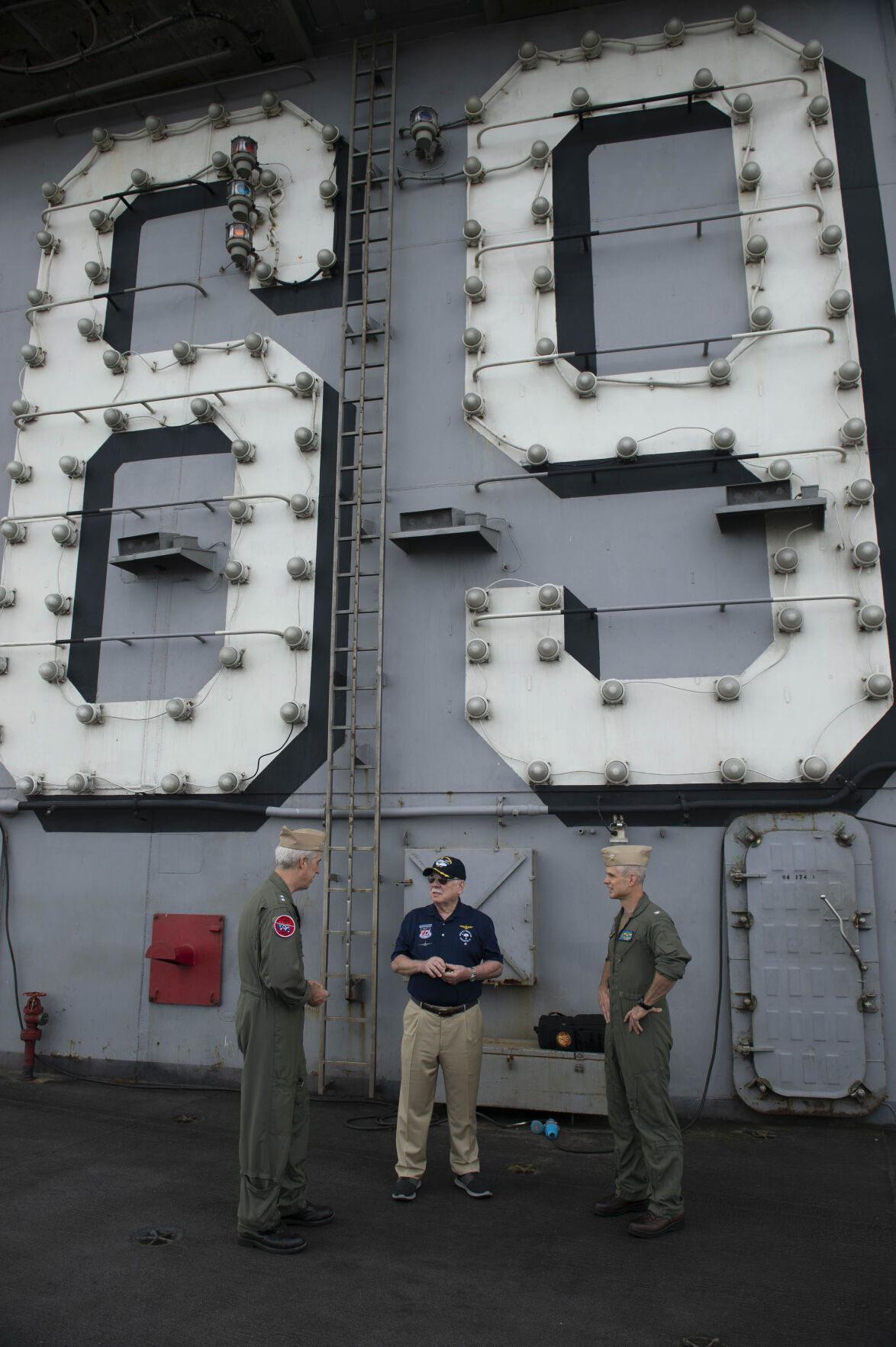 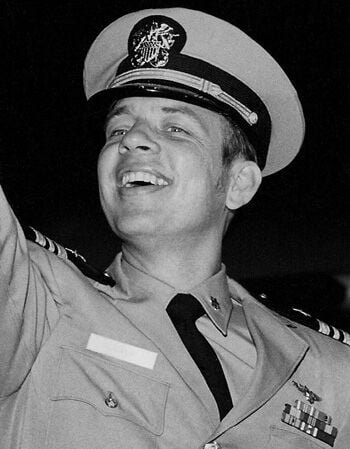 Lt. Cmdr. Al Agnew was on a reconnaissance mission over Hanoi, Vietnam during the tail end of the Vietnam War on December 28, 1972 when a fighter jet escorting him across enemy territory radioed in with an urgent message: Turn right.

Agnew turned his RA-5C Vigilante so sharp that his jet nearly became inverted. But it wasn’t enough.

A missile from an enemy he never saw smashed into his aircraft, forcing Agnew to eject and killing his 26-year-old navigator, Lt. Michael Haifely of Lisbon, Ohio.

As Agnew fell to the earth, the 32-year-old surmised he’d be captured and held as a prisoner of war for years. A popular song from the era by Kris Kristofferson popped into his mind - “Why me, Lord?”

Agnew landed in a North Vietnamese rice patty, where he was quickly apprehended and taken to a prison where he was interrogated, blindfolded and put through a mock execution.

Frightening days turned into weeks and then months, but the years in captivity Agnew feared never came to fruition.

He was released 91 days after he was shot down, making him the last American prisoner of war freed by the North Vietnamese as the years long conflict came to a close.

Agnew continued to serve his nation in various roles until he retired as a commander in 1986, but he always told his family the Navy owed him “one more return” to an aircraft carrier.

On Veterans Day, Agnew, now 80 and living in rural Mullins, South Carolina, finally set foot on an aircraft carrier again for the first time in more than four decades when he was invited aboard USS Dwight D. Eisenhower (CVN 69).

It was a trip his family wasn’t sure would ever happen.

Agnew’s oldest grandson, Chase Agnew, had wanted to get his grandfather aboard an aircraft carrier again for years.

The pair share a special bond over their love of aviation, and the younger Agnew was inspired to join the Navy and work in the aviation community because of his grandfather.

Chase Agnew was an aircraft electrician’s mate, and his first job briefly took him aboard the aircraft carrier USS Enterprise (CVN 65).

That’s the same aircraft carrier his grandfather had launched from the day he was shot down.

“I guess in a roundabout way it was full circle for us,” he said.

The only catapults working during Chase Agnew’s time on the ship were catapults No. 4 and No. 3, which was the same catapult his grandfather used the day of his fateful flight.

Chase was able to get a photo of an F/A-18 launching from that catapult that he had framed for a Christmas gift for his grandfather.

But he still wanted to give his grandfather the final return he knew he craved.

Even though he was a petty officer first class with Helicopter Mine Countermeasure Squadron 15 onboard Naval Station Norfolk - home to every aircraft carrier on the East Coast - he was never quite sure how to get his grandfather aboard one.

When his grandfather visited him on base several years ago, the pair were told the best they could do was go on a tour of the base in a bus and see an aircraft carrier as they drove by the installation’s piers. They couldn’t come aboard.

“He was just like, ‘Okay, well that's a bummer.’ But I kind of took it very personal,” he said.

After 13 years of service, Chase Agnew left the Navy, but he stayed in Norfolk.

Word spread through the tight-knit military and civilian community that Agnew’s grandfather never got to go aboard an aircraft carrier again like he wanted.

It was past time to honor a living hero written about in history books, Meier said.

He made sure Agnew would get his final return.

On Nov. 11, Veterans Day, Al Agnew walked down Pier 14 at Naval Station Norfolk and up the brow of the Eisenhower, and finally stepped foot aboard an aircraft carrier once again.

A bell rang to announce his arrival and he was immediately greeted by Meier and Capt. Kyle Higgins, the Eisenhower’s commanding officer.

Agnew and his grandson were taken to the ship’s state room, where Al Agnew quickly started swapping stories with Meier and Higgins.

Agnew was so excited he declined an offer to take a seat.

Meier noted that he shared something in common with Agnew because he was forced to eject from his EA-6B Prowler during carrier qualifications in the lead up to the Persian Gulf War.

They talked about how slow time seems to move in that moment.

They spoke about aircraft, flight instructors and the perils of ejection.

They told jokes. They laughed. They bonded.

That connection with other aviators is something that will always be important to Agnew. It’s what helped get him through his time in the North Vietnamese prison camp called “The Zoo,” where he was locked up with other American pilots and they survived off of cabbage soup and camaraderie.

In prison, they did what aviators always do when they get together, he said.

They told “sea stories and lies.”

“I don't think we knew it was important at the time, because we had never heard of PTSD,” Agnew said. “We were just doing what aviators do when you’ve got time on your hands. So we talked and I guess … unbeknownst to us we were doing it, we got through a lot of issues before we ever came home.”

While Agnew enjoyed walking around the Eisenhower - even pausing to take in the unique smell of an aircraft carrier that hasn’t changed - it was the conversations he had with his fellow aviators Meier and Higgins he liked the most.

“Just talking aviator stuff,” he said. “You don’t get to do it in a farming community very often.”

For their part, Meier and Higgins wanted Agnew to know his presence meant just as much to them.

On the Eisenhower’s flight deck, Meier presented Agnew with a framed proclamation signed by President Donald Trump and pins for Vietnam War veterans.

“A little bit overdue I think, as a nation, to recognize you this way,” Meier said.

“For some reason we never got one of those (pins) to you. Well, we got it to you now.”

Agnew smiled as his grandson looked on with pride.

Finally, Chase Agnew could say he completed the mission he set out years ago to accomplish.

“It was very, very important,” he said. “I think the people who paved the way for us are so underrated, so undervalued. I think we kind of lose sight of the reason we still have these freedoms are because of people like him and the men that he served with in that timeframe. So it became very important that we recognize and remember them and let them know that they're not forgotten.”