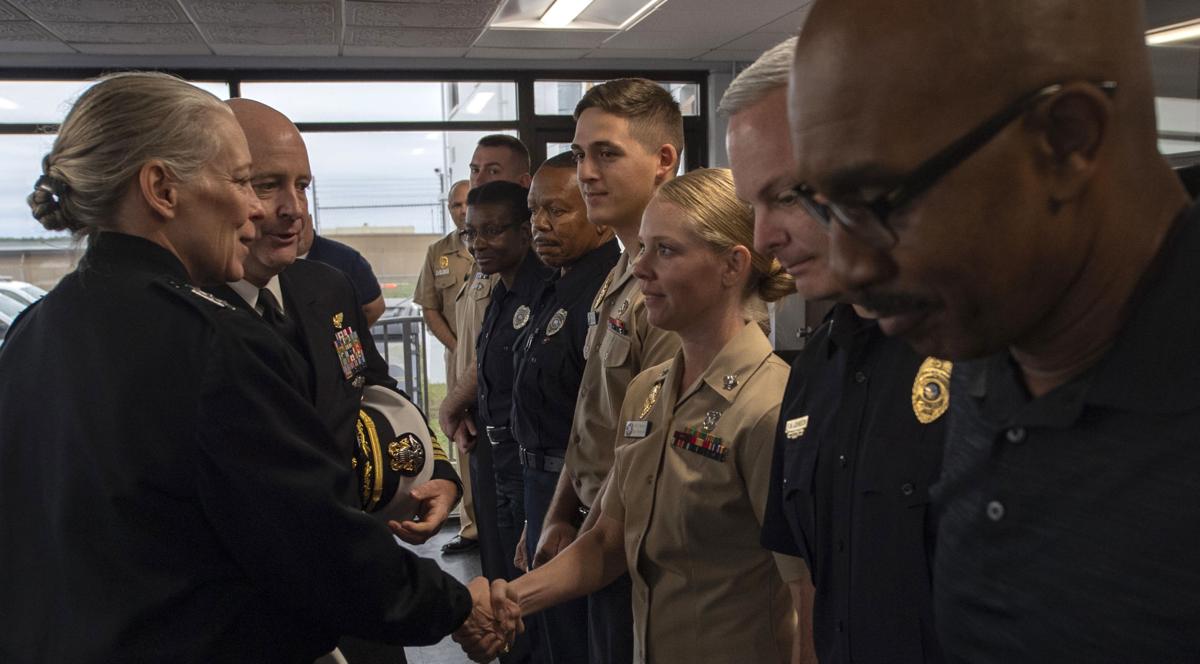 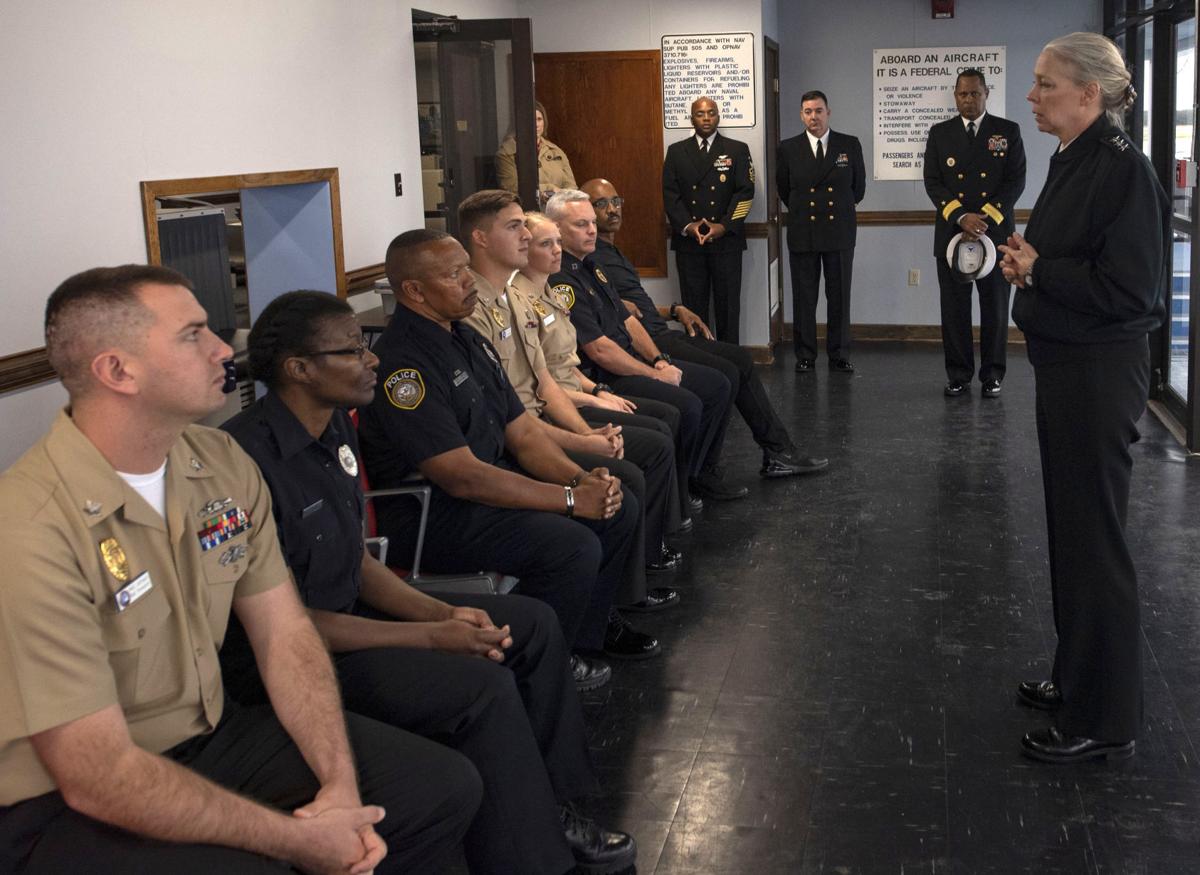 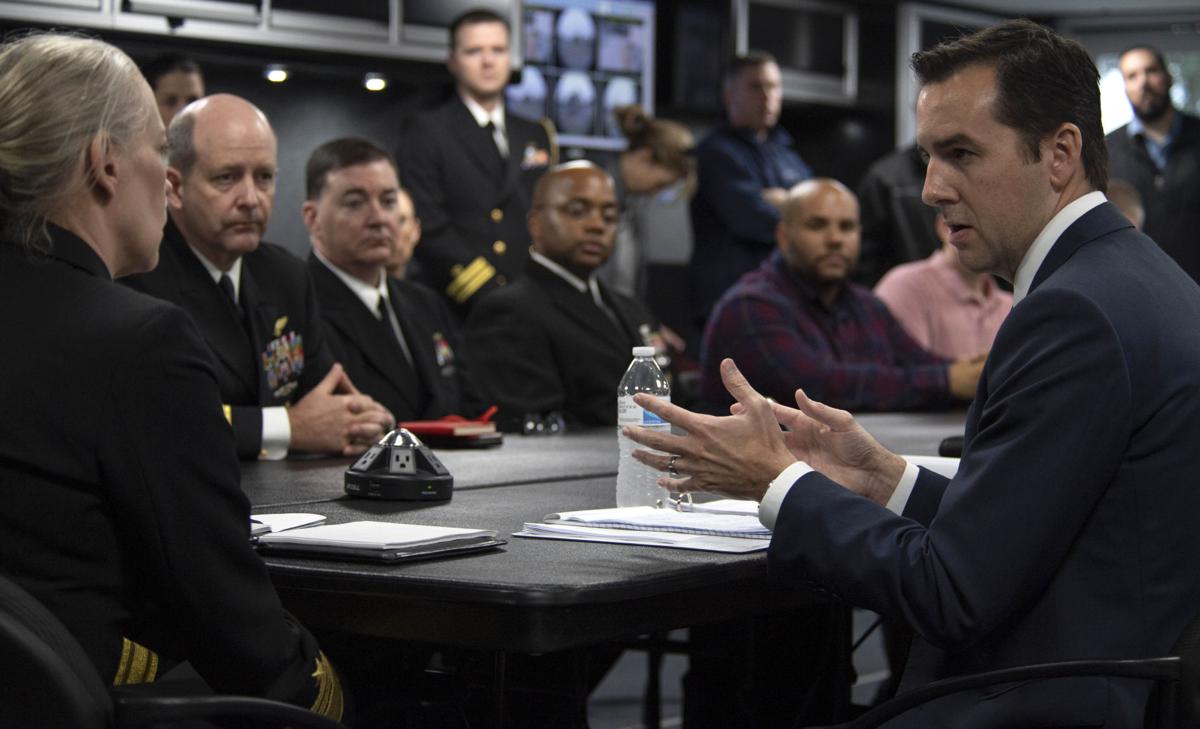 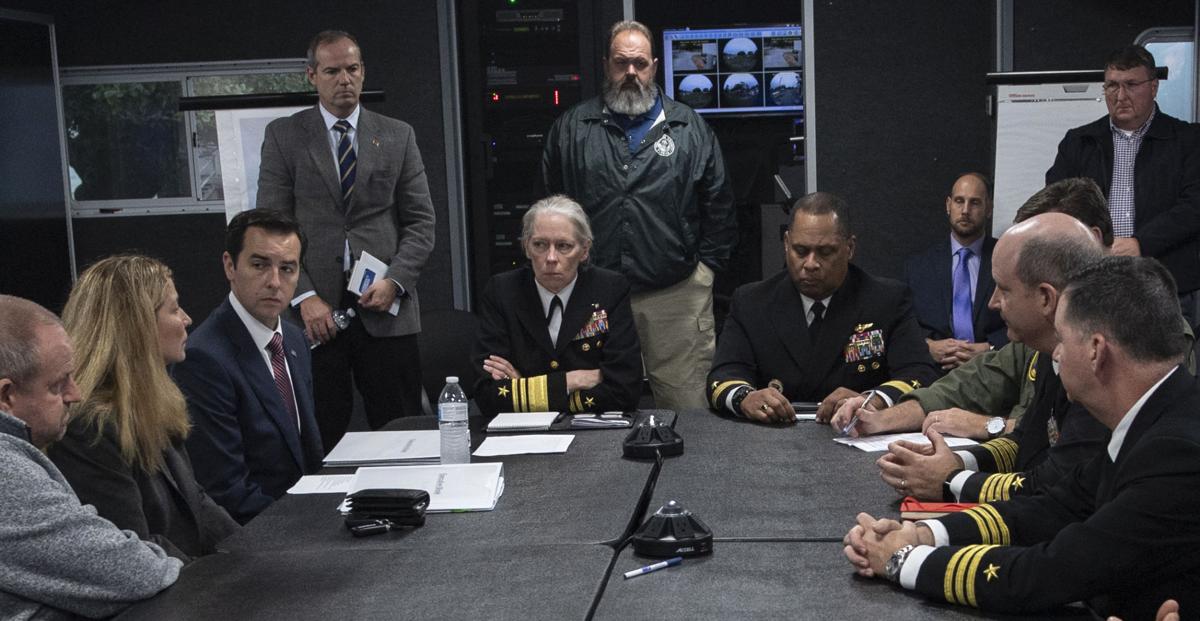 The commander of Navy Installations Command (CNIC), Vice Adm. Mary M. Jackson, on Dec. 12 visited Naval Air Station Pensacola, where she praised the actions of those who responded to the deadly Dec. 6 shooting at the base.

“From the bottom of my heart, I’m so proud of each and every one of you,” Jackson told Navy Security Force (NSF) personnel. “I can’t put myself in your shoes, and I cannot imagine what you have been through, but I do know for sure: You responded in such a miraculous manner, you saved people’s lives.”

Three Sailors were killed and eight individuals were injured during the shooting last week.

Department of the Navy police officers and Navy masters at arms were the first to respond, soon joined by deputies from the Escambia County Sheriff’s Office, thanks to mutual aid agreements. These are a force multiplier, bringing additional response assets to such incidents. Combined and operating as a unified team, the responders saved lives.

“Our Sailors and Navy Civilians were in this fight from the beginning” Jackson noted later. “They responded as trained, went above and beyond, and did not shy away from danger."

Due to the ongoing investigation led by the FBI, many details cannot be released.

“I am very proud of the incredible professionalism of the Navy Security Forces," Jackson said. "We are indebted to each one of you. Protecting others is in your DNA, and that is why you are heroes.”

Jackson said visiting the NSF officers who put their lives on the line was humbling, and she assured them the Navy would support them and their families.

NSF personnel are law enforcement and security professionals who are on watch 24/7 at Navy installations globally. They are armed, qualified, and trained to protect Sailors, families and all those who serve.

NSF personnel train regularly throughout the year for a variety of emergency situations, and training for an active shooter is embedded in both individual and unit level training. Maintaining the highest levels of proficiency and readiness is a priority for Navy Security Forces who protect our installations and personnel at installations across the country. The NSF also work and train with local law enforcement and emergency services agencies so they have a coordinated response to any scale of security where minutes matter.

While at NAS Pensacola, Jackson also met with members of the Naval Criminal Investigative Service (NCIS), FBI and other senior Navy leaders during the visit. The FBI is leading the investigation with support from NCIS and the Escambia County Sherriff’s Office.

“Our interests in returning to normal operations on NAS Pensacola do not supersede our desire for a complete and accurate investigation. You have our full support,” Jackson said to the FBI. She thanked the multiagency investigative team for their thorough work.

In discussions with Rear Adm. Gary Mayes Commander, Navy Region Southeast, and NAS Commanding Officer, Capt. Tim Kinsella, Jackson reaffirmed her commitment to ensuring Navy regional commanders and installation commanding officers have what they need to take care of the fleet, the fighters and their families.

Affected individuals can go to the Military Family Support Center. An Emergency Family Assistance Center has been established at the Fleet and Family Service Center (FFSC). FFSC has counselors to support witnesses, friends, family and base residents, at (850) 452-5990.

Counseling is available through the Chaplain's Office and the Navy Civilian Employee Assistance Program. A Navy a special psychiatric rapid intervention team (SPRINT) is also in Pensacola to provide short-term mental health support to a commands.

The NAS Pensacola shooting is an active, ongoing investigation. If you have any information, please call: 1-800-CALL-FBI.