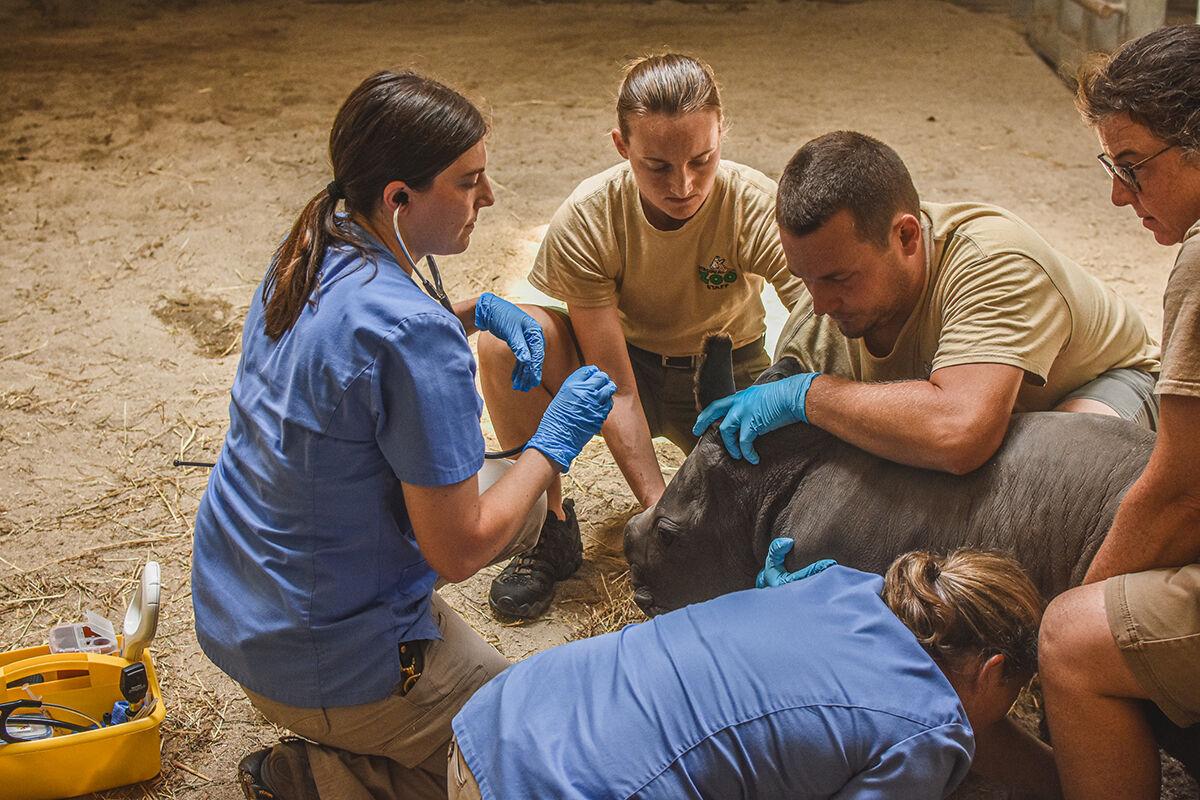 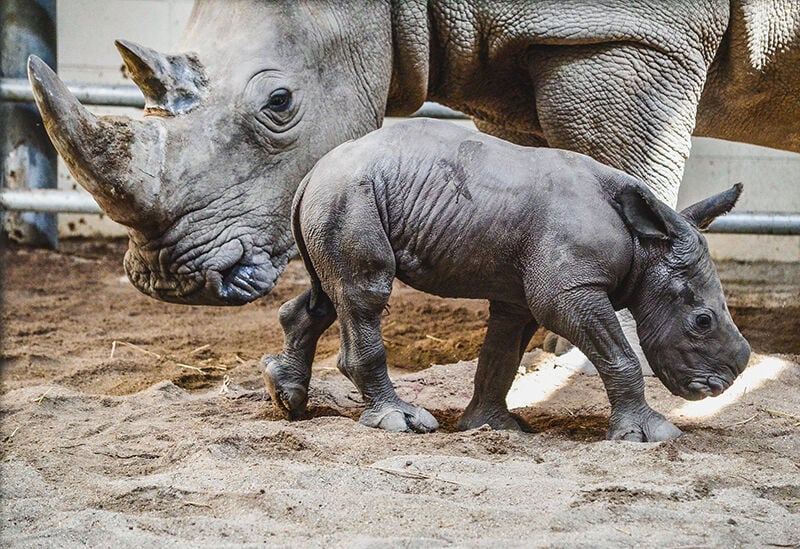 The Virginia Zoo is proud to announce the historic birth of its first-ever Southern white rhinoceros, born to mom, Zina, and dad, Sibindi, on Sunday, July 11, 2021. Animal care staff report the calf is strong, nursing well and is bonding with Mom.

A neonatal exam was performed 36 hours after the calf was born by the Zoo’s Veterinarian, Dr. Tara Reilly, with the assistance of Keepers and Veterinary Technicians. The exam confirmed the calf is a male, weighed in at approximately 125 pounds and stands 22 inches tall and 36 inches long. This is a historic event for the Zoo as this calf is the first of its species to be born at the Virginia Zoo, but also for first-time mom, Zina. From the moment she gave birth, she has shown signs of good mothering instincts and has been very attentive to her calf.

The gestation period for a rhino is 16-18 months, so Zina’s Zoo Keepers and the entire Animal Care Team have been anticipating this birth for several months. Her pregnancy was 16 months and 21 days.

“The pregnancy was confirmed via ultrasound in February,” said Dr. Tara Reilly. “We were able to give some general time frames, but this last month became very apparent we were in the birth window,” Dr. Reilly added. The Animal Care Team collaborated to create a birth plan for Zina, which included routine checkups, diet changes, training Zina for voluntary weekly blood draws, voluntary milk collection, installing a baby monitor (camera to keep an eye on Zina during around-the-clock-watches) and even baby proofing the rhino exhibit.

“We are absolutely thrilled to welcome this baby, who will serve as an ambassador to its species in the wild,” said Greg Bockheim, Executive Director of the Virginia Zoo. “Because of the demand for their horns, rhinos are often killed daily. A baby animal’s cuteness piques the interest of everyone, but then we are able to share their conservation story and the ways we can protect their species,” Bockheim added.

This brings the rhino count to four at the Zoo. Sibindi, 18, Zina, 8, Bora, 7, and now the new male calf. Zina and her calf can be seen in the rhino’s night barn. Mom and baby will stay indoors for Keepers to monitor the two and their bond over the next several weeks. Sibindi and Bora will have access to both the barn and their outdoor habitat. This species remains classified as near threatened by the International Union for Conservation of Nature IUCN) due to threats in the wild due to habitat loss and illegal poaching of their horns. Zina was paired with Sibindi through the Species Survival Plan (SSP) through the Association of Zoos and Aquariums (AZA) to ensure the survival of these protected species.

The Zoo will be auctioning off the naming rights for the baby rhino to raise funds for rhino conservation. The public can place bids on the calf’s name through July 30. To place yours, visit virginiazoo.org/babyrhino. The baby rhino can also be “Zoodopted”! Proceeds from the auction and Zoodoptions will be donated to the Zoo’s conservation partner, the International Rhino Foundation, which provides support for land protection, the translocation of rhinos to more suitable habitats in Africa, and work being done to end the trade in rhino horns.