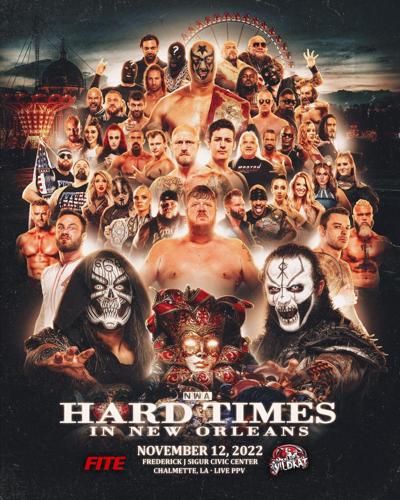 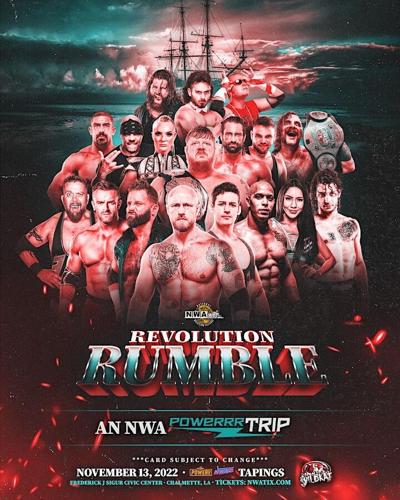 The National Wrestling Alliance, (NWA) the world’s oldest, continuous, wrestling promotion returns this weekend with another exciting Pay-Per-View, Hard Times 3 and Revolution Rumble television tapings in New Orleans, Louisiana. Some of the exciting matches include: for the NWA World’s Heavyweight Championship, Champion Trevor Murdoch vs. Matt Cardona vs. Tyrus. The NWA World Women’s Championship is on the line with Champion Kamille putting up her belt vs. KiLynn King vs. Chelsea Green. The NWA World Junior Heavyweight Champion Homicide defends against Kerry Morton. The NWA World Tag Team Championship is up for grabs as current Champions La Rebelión defend their titles vs Hawx Aerie, the father/son team of Luke Hawx and PJ Hawx who qualified for the title shot after defeating JTG and Dirty Dango on NWA Powerr to become the # 1 contenders.

For the rest of the up to date card, tickets and how to order the PPV, go to https://www.nationalwrestlingalliance.com/

Yiorgo: With us today are two NWA stars, Luke Hawx and NWA World Heavyweight Champion Trevor Murdoch. Why should fans come to the PPV or order it on Fite TV if they are not in the New Orleans area?

Luke Hawx: If you are a wrestling fan and you want to see good wrestling, NWA and WildKat Sports & Entertainment both have great wrestlers, veterans and young guys and gals, hungry to give it their all. There are also incredible matches on both shows. NWA just announced for the MLW National Openweight Title, Davey Richards vs Colby Corino, both guys phenomenal talents, super hard hitting and action packed. There are a lot of matches like that. The wrestlers on both shows are so, so well rounded and very different and you have a little bit of everything. NWA also just announced a Voodoo Queen Casket Match with Max The Impaler vs Natalia Markova. You have some big men, high flying, women, drama, comedy, there’s something for everyone, so why would you not want to be there in a historic NWA event on November 12th and the next night November 13th with the biggest independent show in Louisiana’s history?

Travor Murdoch: The NWA prides itself in heaving “Grown A** Men and Women’’ when stepping into that ring with people that have been in the business with years of experience, go out there and beat the hell out of each other. We bring back an old school wrestling style that not many people can do these days and that is to stand toe-to-toe in the ring with another opponent, no smoke, no mirrors, no music, no nothing. Everything is based on your ability and what you can do from bell to bell.

Y: Luke how excited are you that you and your son PJ are challenging La Rebelión for the NWA World Tag Team Championship?

LH: I don’t have the words to describe what it would mean for my son PJ and I to be the first father/son NWA World Tag Team Champions. This title shot, in our home town, in front of our family, friends, NWA and Wildkat fans means the world to us. We were determined to defeat JTG and Dirty Dango on NWA Powerrr and become the # 1 contenders. This will be one hard fought match and we can’t wait until this Saturday November 12th, to take it to the limit with La Rebelión and become the new NWA World Tag Team Champions.

Y: Trevor this time you are putting your NWA World Heavyweight Title against Tyrus and Matt Cardona in a Triple Threat Match. How do you prepare for this type of match?

TM: The same way when I prepared for Tyrus at our last PPV, NWA 74. The fans are going to witness a war. We are going to battle and beat the hell out of each other. Last time, I put in a lot of ring time, wrestling one guy and as soon as he is tired, I bring in another and another, almost as if I am having one continuous 30-40 minute match. So for me it’s all about cardio and ring work. I’m a Harley Race guy so a lot of my work and training is in the ring because that’s where it’s going to happen. When I’m tired and beaten and hurting, that’s where the job gets done in the ring, in order to survive and win and that is what I intend to do at the end of the night, come out the winner against Tyrus and Matt Cardona.

Y: Luke, you wear many hats. A talented actor of the movie and TV screen, recently seen in the hit Showtime original series Heels and just this past Friday night in the NBC hit series Young Rock in your recurring role as “Stone Cold” Steve Austin, you also own WildKat Sports & Entertainment and are co-promoting this weekend. First congratulations for all your hard work and success and second, what is the difference between the two nights of wrestling?

LH: Thank you so much for the kind words. Hard work does pay off but it’s also important to continue to better yourself and that’s why we are providing fans with the best wrestling this weekend. To answer your question, we are in the same location both nights but the difference is, Saturday night is the NWA Hard Times Pay-Per-View carried live on Fite TV and Sunday is the NWA Powerrr TV taping and Wildkat Sports show. We have had a Wildkats Revolution Rumble Anniversary show for eight years. It’s our biggest event ever. Because of Covid, we have not been able to have it for the last two years. This is our first year back. At our year eight we had 2400 people there. We missed years nine and ten. Now for year eleven, we have a wonderful, big building, great set up for wrestling. ECW and so many others used to run in this historic wrestling building. So Sunday is our 11 year Anniversary show, the Revolution Rumble and we are turning it into a NWA Powerrr Trip TV taping. Saturday you will see all NWA guys and gals and with some Wildkat wrestlers mixed in that are part of the NWA like myself, PJ Hawx, Wildcard Jake Spade and others. On Sunday, you will see all the Wildkat guys and gals with the NWA guys mixed in and that is really good for everyone.

Y: How did your WildKat promotions get involved in co-promoting this two night mega event?

LH: Wildkat Sports have been a part of the NWA for a couple of years now. We have been in somewhat of a standstill because of covid and NWA has been up and running. We had talked about this in the past to do some co-promoting events and the timing didn’t happen due to covid. We are just getting started back again, business is good between filming and wrestling, so we just thought it was really a good time to co-promote.

Y: Trevor, you mentioned that you are a Harley Race Guy. What was training with him like?

TM: I will always say, I’m a Harley Race guy. He put me through the paces. There were no easy corners or steps. My first three months training under Harley, I got sick in the ring every single day. I’m not exaggerating. I would be in the middle of calisthenics, run outside and puke, run back and try to catch up where everybody else was at calisthenics. For him, that was normal, you gotta push your body kid. That was his mentality, go out there and work, and work and work until you can be the hardest worker in the ring. And I am teaching this now to my 16 year old son who wants to play baseball for a living. I am teaching him that champions are not built in the game, they are built in the hours in the gym and the training you put in before you go in the game. I have a beautiful wife, a 22 year old daughter and a 5 year old son as well. I am a blessed man indeed.

Y: How about a quick Harley Race story?

TM: As a joke, I would call him on the phone as Harley Race and argue with him that I was THE Harley Race. He would get so angry with me. I was only able to do it 4 or 5 times because he finally realized it was me and said, (in Harley’s voice), “Trevor, when you get to the school, I’m going to kick your….”

Next Week, Part II with the results of the NWA PPV, and our interviews with Luke talking about Young Rock, Heels and so much more. Also Trevor sharing more wrestling stories.