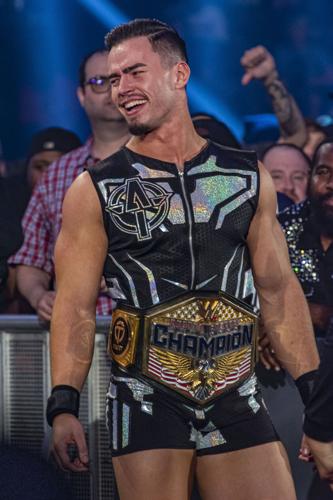 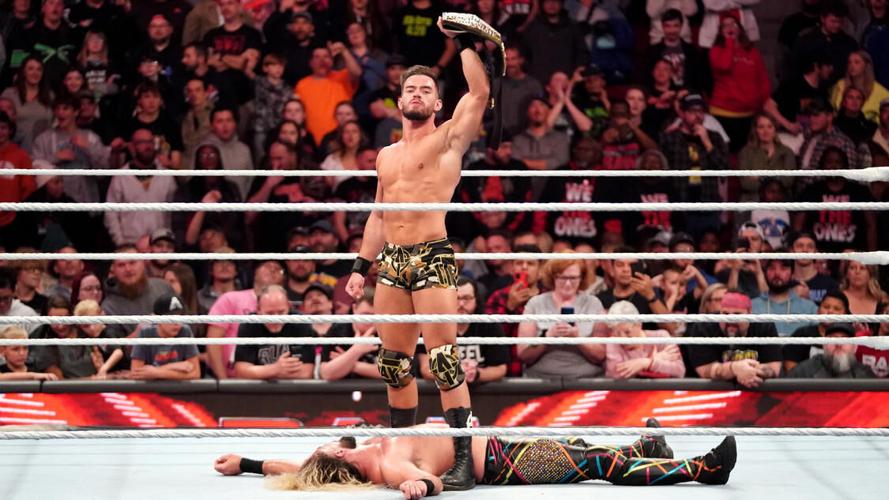 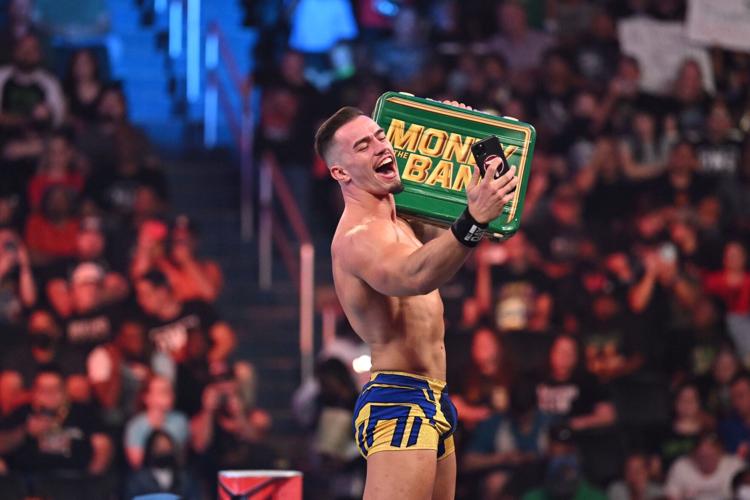 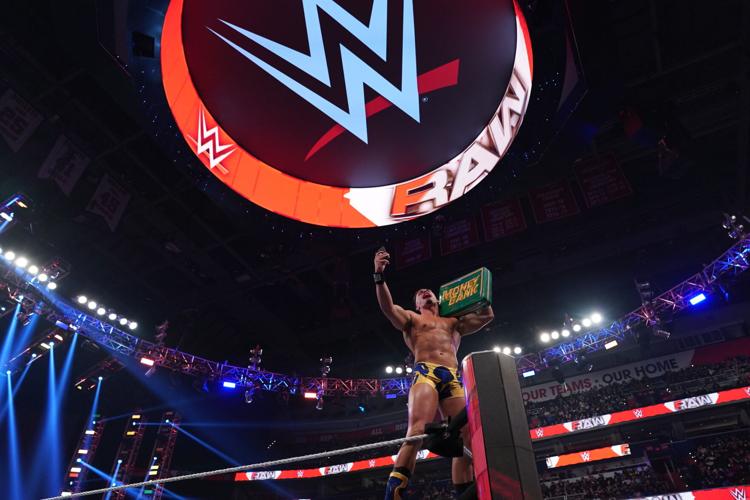 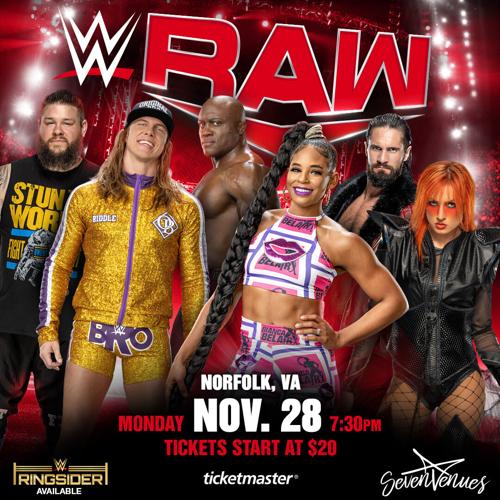 The world wide phenomenon known as WWE, World Wide Entertainment: Then, Now Forever, Together returns to the Norfolk Scope with a live taping, broadcast all over the world, of Monday Night RAW this Monday November 28th.

There are many WWE superstars scheduled to appear such as: Alexa Bliss, Asuka, The Miz, Johnny Gargano, The Judgement Day, The O.C. many more and a blockbuster main event featuring Matt Riddle vs. Bobby Lashley, vs. United States Champion Seth ‘Freakin’ Rollins vs. Austin Theory.

Yiorgo: With us today is WWE Superstar Austin Theory. Why should new WWE fans come to the Monday Night Raw live show Nov 28th? What will they see and experience that they will not see on TV?

Austin Theory: The first thing they will experience is seeing me, and I’m not going to say the future, I’m going to say “The Now.” They are going to see exactly who Austin Theory is and exactly why he can do this all day, and I’m going to do what I always do and that is put an A town down. For anybody that has never been to a Monday Night RAW, it’s for family and friends and you get to go on a wild ride of these crazy stories that are happening right in front of you. It’s all live, it’s all on TV and we are all interacting together and it’s going to be a great time for everyone.

Y: What is required of you and all the other superstars on RAW day?

AT: So typically, if it’s eastern time for example, we get there by 2:00 PM Of course the show picks up at 8:00 PM and wraps by 11:00 PM. In between, it all varies based on what you have to do. Depending if you have a match or more then one match, or you have an interview or in ring promo. Your day kinda varies, based on what you have and some days you have so much stuff and not even pertaining to the show. There is stuff you need to do backstage for travel, live event interviews like what we are doing right now, there is just so much. Being a WWE superstar means it’s often a jam packed day everyday. There’s not really an off day when it comes to being a WWE Superstar.

Y: Where were you born and what made you fall in love with pro wrestling?

AT: Oftentimes you will hear me say that I am from Atlanta, Georgia because Atlanta is more well known, but I was actually born in McDonough, about an hour away south of Atlanta. I grew up there my whole life. My first wrestling experience was in McDonough. Deep South Wrestling, one of WWE’s developmental territories used to be there. They don’t have those anymore. We have the WWE Performance Center. I remember I was eight years old the first time I met a professional wrestler. It was at the gym my mom was going to and the one that I started working out too when I turned 12.

My mom had gotten me out of the daycare at the gym, I was standing behind the counter trying to order a protein shake and this giant dude walked up. He was from the Deep South show, he told me what he did and I was pretty blown away just because of how this guy looked, a big dude, who did not look like a normal human being. I remember asking him, who are you and he said that he was a wrestler. I was like, what is that? He looked like a superhero and I wanted to see what this guy does.

My mom told me about the Deep South wrestling show and I went to it. It was in McDonough and as soon as I saw that for the first time, the next Monday I turned on RAW, I saw John Cena and I was hooked. I started getting the figures and the games and watching it every week. I would tell people all the time that this is what I’m going to spend all of my life doing.

Y: How did you get signed by WWE what was it like at performance center who do you credit with helping you fondest memories

AT: I always looked for different avenues to get noticed by the WWE. The only reason I even did a bodybuilding show was not because I had a passion for bodybuilding. I always found it interesting but as a young kid I always had a mindset of how can I get to WWE as fast as I could. My plan was to graduate high school and go straight into the WWE. I didn’t know how, but as I was getting older, I was looking for these ways.

In 2015, I was 17 and one of my friends told me about the NPC Georgia Bodybuilding Championship, Teen Men category. My friend said WWE scouts people at their shows so I figured if I win first place, I would get noticed by WWE. Well I got first place but I didn’t get noticed so I was like what do I have to do next?

Y: Is that when you started training to become a wrestler?

AT: Yes, I went to a wrestling school called WWA4 in Atlanta. I was driving to Atlanta everyday. It sucked because I had a 1996 Ford Explorer. It costs like $25.00 to drive there everyday and when you are an 18 year old kid, that’s a lot of money. Literally that school sent me off and my trainer A. R. Fox said to do all these smaller shows that aren’t going to pay anything and aren’t going to have a lot of crowds but keep doing them and keep building. That’s what I did. I kept building myself up until I got noticed. I was offered a tryout with WWE and the rest is history.

Y: Who trained you at the WWE Performance Center?

AT: The main guys that helped me out were: Fit Finley, Scotty “Too Hotty,” Norman Smiley, Steve Corino and I worked a lot with Terry Taylor as well as Shawn Michaels was a huge help.

Y: And then you get THE call to move to the main roster. Can you tell us about it?

AT: It was one of those things that we could see that NXT was changing. They were going to be bringing up from the older NXT to the main roster and I was one of those guys. I was doing dark matches before RAW and SmackDown started not really knowing what the plan was and eventually finding out that I will be working with Mr. McMahon backstage. That was pretty wild just to be in that scenario and to know that this is my first thing on the main roster and I’m going straight to the deep end. It’s one of those things that I remember at the time everybody telling me, Vince said he was never coming back on TV for anybody and he came back on for you. I remember several people saying that to me.

Y: You are 25 years old, you have accomplished so much already and have a great future ahead of you. What do you attribute that to?

I think a lot of times I find myself in the scenario where, yes I am 25 years old, but I started working for this when I was 12 years old. I had a different mentality. I wasn’t going to parties, I wasn’t doing drugs, I was so set on this that I had to go to the gym everyday. Since I was 12, I’ve really carved that path in order to get here. When I find myself in the ring at 25 with these guys that I grew up watching, it’s amazing and one hell of an experience but for me, I know that I have earned to get there. It’s not that I just got lucky or I was put in a good spot. I know every single time, I earned that. For me that means more than anything ever will. I’ve also been blessed with being able to not let my nerves over react, or feel like I’m not prepared for something. I feel like everybody should be like this. If you worked hard and put in that grind, no matter what, you always gotta remember what you sacrificed in order to get here.

Y: Can you share a favorite Vince McMahon story?

AT: I remember right before I was going to debut on RAW to do the selfie thing with Jeff Hardy, Mr. McMahon was walking up to the gorilla position. For those not familiar with the term, it’s the backstage area, right before you walk out. Mr. McMahon was on his way there, I was already there, about to go out, the first thing I was ever going to do on TV. I remember him looking at me in the eyes and telling me, “Go out there and be confident like I know you are.” And for me, especially coming from Mr. MacMahon, it’s like, he knows.

Y: You are referring to yourself as “The Now.” What do you mean by that?

Y: How about a pinch me moment?

AT: Definitely when I did my backstage promo with John Cena. Just how cool that was to go through that whole process with him and pretty much him telling me when it came to that promo, “To come up with my own ideas, and come back to me and we’ll figure it out and let me see how it sounds.” I remember coming back to him with some stuff and him saying, “Man this is really good but if you want to, let’s take a chance.” Long story short, I was trying to come up with his own stuff and he was like, “Use your stuff, make this about you, don’t worry about me.” I remember doing that promo with him and him telling me to either take a chance or stick with what’s on the paper. We had 10 minutes so I either memorize what’s on that paper or come on there with a natural confidence and that’s what I did, I took that chance. To me, I love how that promo came off because I took that chance. That’s what life is all about, putting in that hard work and taking that chance.