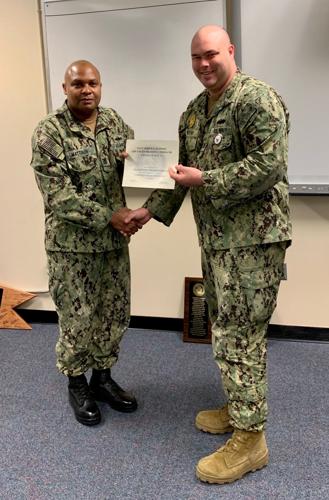 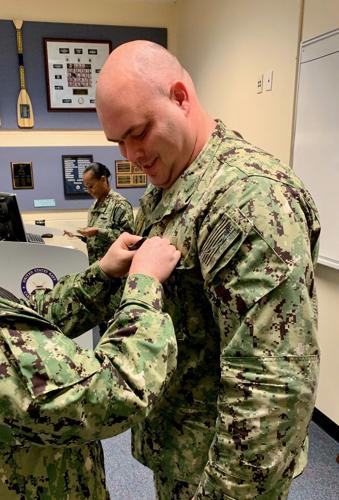 “If at first you don’t succeed, try, try again,” is a proverb that reminds people to not give up and that persistence usually pays off in the end. In the U.S. Navy, persistence can lead a Sailor to many rewards, such as advancement or special programs.

Master-at-Arms 2nd Class Brandon Moran, from Columbia, North Carolina, has embodied the meaning of this proverb on his journey to becoming a Navy Counselor.

Navy Counselors, or “NCs,” are experts in career development. The rating is not available to first-term Navy enlistees, because applicants must be knowledgeable in all aspects of the Navy environment in order to best assist their Sailors. Navy Counselors are responsible for retention, dealing in re-enlistments, career development, commissioning programs, and a plethora of other duties.

“I realized that most people who come into the Navy were just like me,” said Moran. “We had no idea what we wanted to do; we were just here, and sometimes it seems that nobody helps. But that’s the Navy Counselor’s whole job. I became an MA knowing I would be helping people, but that’s a different type of help than what NCs provide.”

“I got interested in career counseling about two and a half years ago when I was working in the security department,” said Moran. “I submitted a package to attend the NEC school, but I wasn’t picked up the first time.”

However, attending school isn’t the only step to becoming a Navy Counselor. Interested Sailors must log plenty of hours of on-the-job training and work experience, something Moran was lacking at the time he submitted his first package.

Moran said that his desire to help others throughout their career led him to being a divisional, and eventually departmental, career counselor at the Naval Air Station Oceana security department.

“I was a watch commander in charge of personnel on three different bases,” said Moran. “I started as a divisional counselor, helping NC1 Theisen do career development boards and whatever else I could do on my off days. Once the NC billet in the security department opened up, I was told that I could move towards becoming a departmental counselor but couldn’t receive the training until I had more experience.”

Putting his goals at the front of his mind, Moran said he worked as hard as he could to gain the necessary experience in order to get accepted to the school where he would receive his official training. Naval Air Station Oceana command career counselor, Navy Counselor 1st Class Tiffani Theisen, provided mentorship to Moran as he worked as her assistant in the command career counselor office.

“With great leadership and great people behind me, I got pretty good at it,” said Moran. “Going from a department of 190 people to 600 people at the command level, I had to learn more and get to know everybody again.”

Moran once again submitted his package to attend the Navy enlisted classification school to advance his development as a career counselor.

Moran said his next step to completing his goal is finishing his rating conversion to become a Navy Counselor 2nd Class.

“It takes patience and persistence,” said Moran. “Anything that you want is not going to come easy to you. If you want it, you gotta keep at it, and you’re going to find a way to do it. There is always a way.”