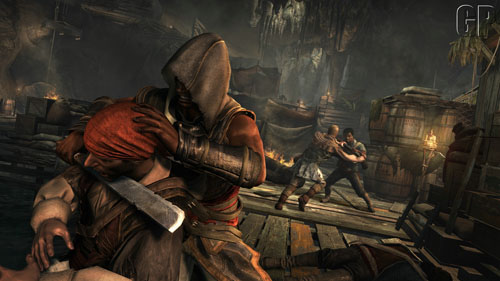 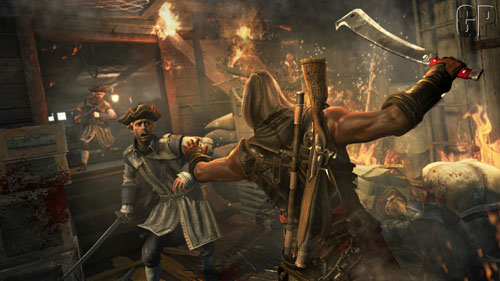 “Assassin’s Creed IV Black Flag” tells the story of Edward Kenway, a young British man with a thirst for danger and adventure, who falls from privateering for the Royal navy into piracy as the war between the major Empires comes to an end. Kenway is a fierce pirate and seasoned fighter who soon finds himself embroiled in the ancient war between Assassins and Templars.

Set at the dawn of the 18th Century, the game features some of the most infamous pirates in history, such as Blackbeard and Charles Vane, and takes players on a journey throughout the West Indies during a turbulent and violent period of time later to become known as the Golden Age of Pirates.

Gameplay in “Assassin’s Creed IV Black Flag” is based upon the franchise’s proven tenets. It features a vast open world with more than 50 navigable locations. Combat combines the weaponry of the Assassin’s Order with armaments of the era, and rewards both daring and stealth. And the series’ acclaimed multiplayer experience is more varied and ruthless than ever.

Three new characters join the hunt, Blackbeard, the Jaguar and The Orchid, each character bringing their unique skill set to battle for the title of best assassin.

Blackbeard, wielding a sword and a short temper is not to be trifled with. His reputation as a feared pirate is justly received and his preferred kill moves include using his tremendous strength to throw his targets off balance and then quickly finishing them with one clean strike.

The Orchid, a Templar-friendly deadly assassin grew up in China, serving as a military advisor in the Quing dynasty where she honed her murderous skills. She executes opponents swiftly and gracefully with her katana, an extension of her mind and body.

The Jaguar, Cuali, an Aztec warrior from Mexico, took to the sea to fight against the Spanish conquest of Central America. A fighter, he survived the destruction of his community and joined forces with a growing contingency of native Templars who sought renewed peace and order. Driven by a mystical force, The Jaguar fights like his namesake, striking swiftly and quietly with his preferred weapon, a discreet axe.