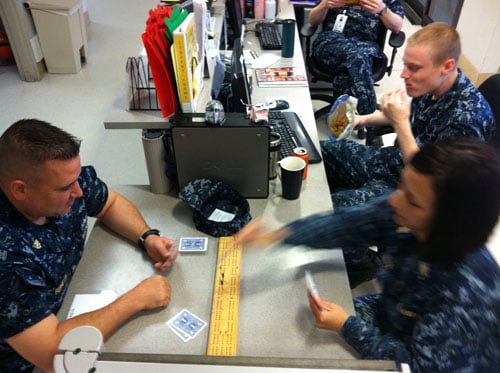 Chief Hospital Corpsman Michael Ferretta (left), a member of the Tidewater 29ers, and Lt. Cmdr. Lina Badura play a game of cribbage during lunchtime at the Branch Medical Clinic Norfolk. 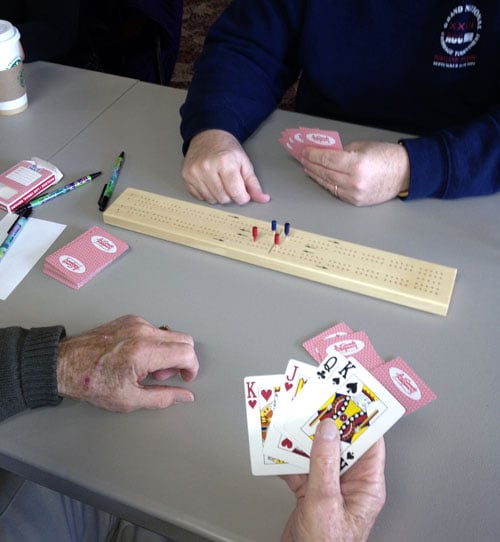 Chief Hospital Corpsman Michael Ferretta (left), a member of the Tidewater 29ers, and Lt. Cmdr. Lina Badura play a game of cribbage during lunchtime at the Branch Medical Clinic Norfolk.

NORFOLK -- If you’ve got a competitive streak, love to play cards and are good at basic math, the local Grass Roots Cribbage Club 117 has a seat waiting for you.

In case you’re unfamiliar with cribbage – which can be traced back to the 1700s and has enjoyed widespread play in the U.S. Navy since World War II – here’s a quick overview. Traditionally, the game is played by two players in which each player tries to form various counting combinations of cards to earn points. Score is kept by inserting pegs into holes arranged in rows on a small board. The first person to reach 121 points wins.

Unlike “kitchen cribbage” where the rules are loose and the play is relaxed, the grass roots variety is a faster-paced and more aggressive card game, said Marvin Lewis, director of Grass Roots Club 117, also known as the Tidewater 29ers.

“Newcomers should know the basics on how to play,” he said. “You may not be as competitive and fast as the rest of us, but that will come with time. You’ll learn by doing.”

The club, whose name reflects the 29-point perfect cribbage hand, meets every Wednesday at 7 p.m. at Veterans of Foreign Wars Post 4809 in Norfolk. It’s a member of the American Cribbage Congress (ACC) (www.cribbage.org), the largest non-profit cribbage organization in the world.

All ACC member clubs play by an established set of standardized rules and scoring system with players earning points for their performances throughout the season. Statistics are maintained each year and members can win yearly and lifetime awards when they reach various milestones.

The weekly meetings in Norfolk are set up as small local tournaments where players typically are seated at a long table and play nine games with different opponents, with play normally taking two to three hours. Players ante up $7 a night to play, with $5 going into the winners’ kitty and $2 toward expenses and various grass root prizes, plaques, certificates, jackets, clocks and trophies, which are awarded throughout the year depending on various accomplishments.

At the end of the night, the players with the highest number of points win cash prizes.

Currently, there are approximately 25 members in the Tidewater 29ers, with the youngest still in high school and the oldest in his 70s. The membership roster includes men and women, including retired military, civilians and government workers, among others. But they all have one thing in common ... they love their cribbage.

“I like the speed of the game and having to make decisions quickly,” said Dave Sniegowski, a retired chief petty officer who initially learned to play the game aboard ship more than 20 years ago and has been hooked ever since. “With all the adding and counting, it helps keep you sharp.”

Bob Morthland, a retired chief petty officer who said he played cribbage at every duty station he went to, likes the game’s uncertainty.

“You can’t predict the outcome,” he said. “Things can change in a flash. You might be at the end of a game and need two points to win while your opponent needs 22 and he can end up beating you. It’s not over until it’s over.”

And then there are those who like to play for their own satisfaction.

“I’m the one who relishes stealing wins from someone and leaving my opponent in the stink hole,” said Sandra Shrum, a long-time member who has been playing cribbage since she was a 12-year-old Navy brat. “I like the social aspect, the competitiveness, the camaraderie and the people in general. But mostly I like getting their goat.”

The ACC sponsors more than 150 sanctioned tournaments a year in North America. Winners of these tournaments can earn thousands, with the winner of the prestigious annual tournament in Reno, Nev., taking home more than $10,000.

“A lot of people chase master rating points, so they will get invited to special tournaments if they do well,” said Lewis.

“The great thing about cribbage is that someone who has been playing all their life has an equal opportunity to win against someone who just picked up game,” said Sniegowski. “It’s not about your experience level. It’s about making the right decision and counting your cards.”

For more information about the club or how you can join, contact Marvin Lewis at 488-1920.

Believed to have been invented by British Soldier and poet Sir John Suckling in the 17th century, cribbage was brought to America by English settlers. It soon became a popular pastime among Sailors and fishermen, especially in New England.

During World War II, cribbage became especially widespread among the Submariners, who often played around the clock while patrolling for Japanese ships.

In 1943, according to Navy lore, the USS Wahoo, one of the most celebrated subs at the time, was ordered to the extreme Northern reaches of the Yellow Sea where no sub had ever ventured. To help ease the tension as it patrolled the dangerous territory, the sub’s Commander, Dudley “Mush” Morton, and his Executive Officer, Richard “Dick” O’Kane, began a game of cribbage. Right off, Morton dealt O’Kane a “perfect 29” hand, the highest possible hand in cribbage. The crew calculated the odds to be a one in 216,000 chance of happening.

The crew considered the hand a good omen and indeed luck was on their side. At the mission’s end, the Wahoo had set a record for the number of ships sunk. O’Kane and his fellow officers signed the four fives and the jack that they credited as a sign of their good fortune, and O’Kane had them framed.

O’Kane detached from the Wahoo and went on to command the Tang, which subsequently broke the Wahoo’s record for the most ships sunk in a single patrol. And while O’Kane was captured by the Japanese when one of the Tang’s torpedoes malfunctioned and sunk the sub, he was awarded the Medal of Honor for his “conspicuous gallantry and intrepidity” during his sub’s final mission.

An important part of Submariner tradition, the lucky cribbage board used by O’Kane and Morton for that memorable game, has been passed along since WWII to the oldest active submarine in the U.S. Pacific Fleet. It currently resides in the wardroom aboard the USS Bremerton.