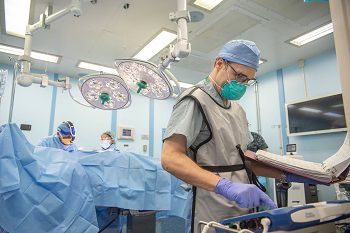 Navy Cmdr. (Dr.) Travis Harrell, right, a cardiologist from San Diego, enters patient information into a pacemaker programming system aboard the hospital ship USNS Mercy, April 29, 2020. The Mercy deployed in support of the nation's COVID-19 response to serve as a referral hospital for non-COVID-19 patients admitted to shore-based hospitals. The strategy allowed shore-based hospitals to focus their efforts on COVID-19 cases. 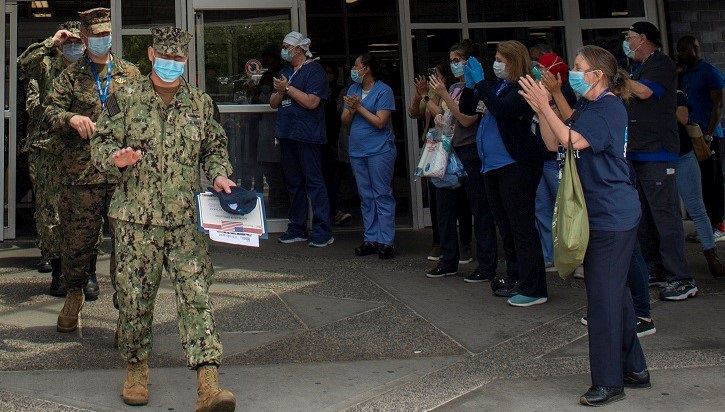 Navy Cmdr. (Dr.) Travis Harrell, right, a cardiologist from San Diego, enters patient information into a pacemaker programming system aboard the hospital ship USNS Mercy, April 29, 2020. The Mercy deployed in support of the nation's COVID-19 response to serve as a referral hospital for non-COVID-19 patients admitted to shore-based hospitals. The strategy allowed shore-based hospitals to focus their efforts on COVID-19 cases.

The coronavirus has shined a light onto the capabilities of the military health care system, and medics are responding, the assistant secretary of defense for health affairs said.

Thomas McCaffery told the Defense Writers Group today that he spends about 80% to 90% of his time on the Military Health System's response to COVID-19.

It is not surprising, as he is responsible for ensuring the health of the force and that forces are capable and ready if called on to deploy.

McCaffery, who came to the job in 2017 from time in the private sector and state of California health care systems, was struck by the short-term nature of the system when he first came on board. "One of the things that I found really interesting, and somewhat challenging, was the fact that in the military … there is continual change in leadership levels," he said.

He said he was struck that leadership positions turn over every two or three years, very different from his time in the civilian sector. "I was like, 'Wow, now that's a challenging dynamic,'" he said.

This works against long-term issues, but there's a flip side, he noted. "That is, our uniform leaders and our civilians are very, very good at adapting to change, and it's not something unique; they're used to it," he said. "It's part of the culture, part of their DNA. The health system leadership pivoted easily when the pandemic hit," he added.

The deployment of hospital ships to New York City and Los Angeles, the deployment of Army medical units to cities that include Seattle, Denver and Dallas, and the sharing of medical equipment with civilian hospitals are just some of the issues to which the Military Health System had to adjust, McCaffery said.

When U.S. medical forces are deployed, they usually are going overseas or perhaps to domestic areas affected by emergencies such as hurricanes, he said, and they deal with trauma rather than disease. "This was very different — a very different enemy," McCaffery said. "As we saw in New York City, we had several hundred of our uniformed medical providers actually helping staff civilian hospitals."

The military has a long-standing research arm that developed treatments for malaria, yellow fever and more to protect service members deployed around the world, McCaffery said. "But it often translates into supportive, kind of larger, social civilian health care sector," he added. "Obviously, we do research on vaccines, medical countermeasures for military purposes, keeping our troops safe. But we were very quick to pivot and leverage that kind of research that has already been going on for our military purposes, to … vaccine research and development for COVID therapeutics for treatment."