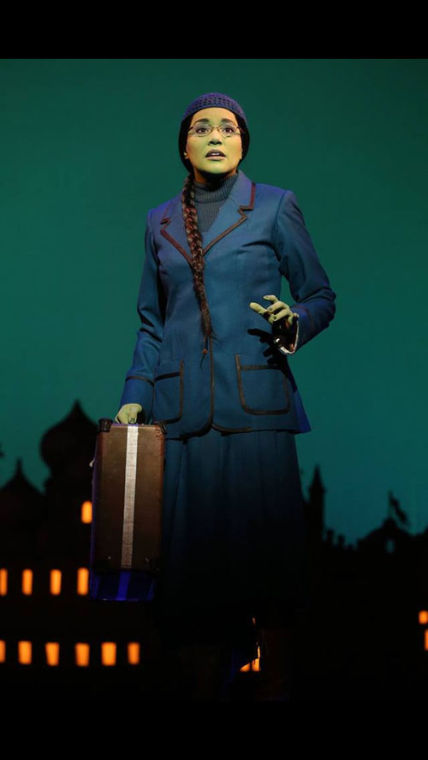 Norfolk native Emmy Raver-Lampman is currently touring with the Broadway hit “Wicked,” playing at the Altria Theater in Richmond through May 4. 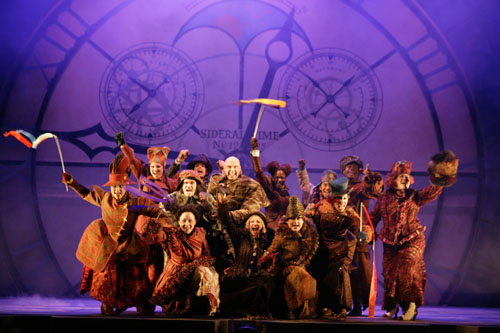 “Wicked” celebrated its 10th anniversary on Broadway on Oct. 30, 2013, and played for over 4,349 performances,making it the 11th longest-running Broadway show in history.

A typical performance of “Wicked” runs for approximately two hours and 30 minutes, plus a 15 minute intermission.

Norfolk native Emmy Raver-Lampman is currently touring with the Broadway hit “Wicked,” playing at the Altria Theater in Richmond through May 4.

“Wicked” celebrated its 10th anniversary on Broadway on Oct. 30, 2013, and played for over 4,349 performances,making it the 11th longest-running Broadway show in history.

A typical performance of “Wicked” runs for approximately two hours and 30 minutes, plus a 15 minute intermission.

RICHMOND -- Broadway in Richmond has outdone itself again. Back by “popular” demand, is the wickedly, “WICKED!” Winner of more than 50 major awards, including a Grammy and three Tony Awards, it has broken every box office record every time it plays in Richmond. It will play at the Altria Theater from April 23 - May 4.

And who is the standby for Elphaba, the wicked witch of the West, but our very own Norfolk native Emmy Raver-Lampman. I am delighted to bring a portion of our interview to you.

Yiorgo: Emmy, thank you in advance for making the 757 proud. For someone so young, you have had your share of touring nationally and of performing on Broadway on several occasions. Tell us about your time growing up in the Hampton Roads Area and how you fell in love with musical theater.

Emmy Raver-Lampman: I grew up in a very musical home with my dad always-playing piano and the guitar. He encouraged me to learn both but I liked the singing part more and I would sing at home, with friends or school PTA shows. One of our family friends, after she heard me sing “Tomorrow” from “Annie,” at Larchmont Elementary School, approached my mom and told her about the Hurrah Players.

ER-L: I loved my time there. I started with the Monday night theater class and fell instantly in love with it. For the next 10 years that was my life. I took that class and did the shows. In my 8th grade year, I auditioned for Governors school and got in. I also attended Maury High. During those years, some of the plays that I was in were: “Little Shop of Horrors,” “Cabaret,” “How to Succeed in Business without really trying,” “Honk,” just to mention a few. Those are the memories I look back fondly at. I would not be where I am today if I had not joined the Hurrah Players that’s where the seed was planted.

Y: Where did you go to college?

ER-L: I chose Marymount Manhattan College in New York City because I wanted to be in the city. All those Hurrah trips we took to New York and along with my parents and grandma taking me there had a big impact on me. I fell in love with the city. I was able to go to auditions and got a real New York experience by moving into my own apartment. Marymount gave us that flexibility.

Y: You were able to tour with the musical “Hair” and then go to Broadway, how did that happen?

ER-L: We had a guest lecturer director for “Bright Lights, Big City,” Tom Wojtunik. He asked me to audition for “Children of Eden” and I got the lead. That led to me auditioning for “Hair” and getting my Equity card. We were on tour when the director told us we were going to Broadway. In one show, I got my Equity card, national tour, and went to Broadway. I was also taking classes on line and graduated in 2012.

Y: From there you were in “Jekyll and Hyde” with Constantine Maroulis and Debra Cox and became Debra’s understudy. How did that happen?

ER-L: In 24 hours I went from being a nanny and waiting on tables in order to pay my bills to being in “Jekyll and Hyde” all because at the last minute I decided to go hear a lecture. The speaker was the plays director, Jeff Calhounm who asked me to audition and I got the part of Debra’s understudy.

In spring we opened on Broadway. Unfortunately the show did not do so well. Everything happens for a reason though because I have great friendships out of it and I got to go on Broadway in a leading role and had my parents and 30 of my friends in the house.

Y: Do you have a funny story about “Jekyll and Hyde?”

ER-L: It was opening night of the “Jekyll and Hyde” national tour. The big ensemble opening number of the musical is called “Facade”. (It’s about how we all hide our true selves from society) So in this number, all the Board of Governors enter in their undergarments and throughout the song, their maids and butlers get them dressed in their elaborate “steam punk” Victorian-era clothes. Well, the prop person forgot to pre-set one of my cast mates pants and the ensemble comes out at the top with all the clothes in hand. (Basically no turning back if something is forgotten)...so, there were no pants for this poor actor, and because that song went right into the next scene that was about 15 minutes long, for the first 25 minutes of the show he had to do it in his white, knee length, Victorian underwear – on opening night!

I have never laughed so hard in my entire life, and he was a total trooper. And lucky for him, his character was a little crazy anyway so it kind a worked. But the best part is, our director was in the audience that night and didn’t even notice. Too funny.

Y: It was while you were doing “A night with Janis Joplin” that you got the call for “Wicked.”

ER-L: My agent had me come down to office and said that I had gotten my first principal part as a standby for Elphaba in “Wicked.” I started crying. The “Wicked” world is so huge and has such a loyal following.

Y: Now a standby means you get paid to be ready to go on at a moments notice for the actress playing Elphaba. Has that happen so far?

ER-L: Yes, I was siting watching something on Netflix and had my head down when one of my friends, Alli, said “you’re on, you’re on!” And it was right after the defying “Gravity” number. Normally it takes 25 min to become green but that night in 10 minutes I was in full makeup and on stage. Although I am not guaranteed any shows, I have been able to do two shows back-to-back.

Y: What advise would you give those following in your footsteps?

ER-L: To never take anything for granted. If I had not gone to one of those auditions, my life would be very different. Also always treat others the way you want to be treated. Your reputation is important because that is all you have in this industry. Most of the time your reputation will get you a job over talent. Be kind and loving and hard working and diligent and it will open doors. Everyone, everyone will pick someone they like to work with then over someone who is mean and catty.

Y: Why should people see this play?

ER-L: This is a timeless story for all ages. It is a story of friendship, forgiveness, and of acceptance. It is something that everyone can relate to. And the play itself is from beginning to the end, the music, and choreography, staging it will all leave you speechless and wanting more.