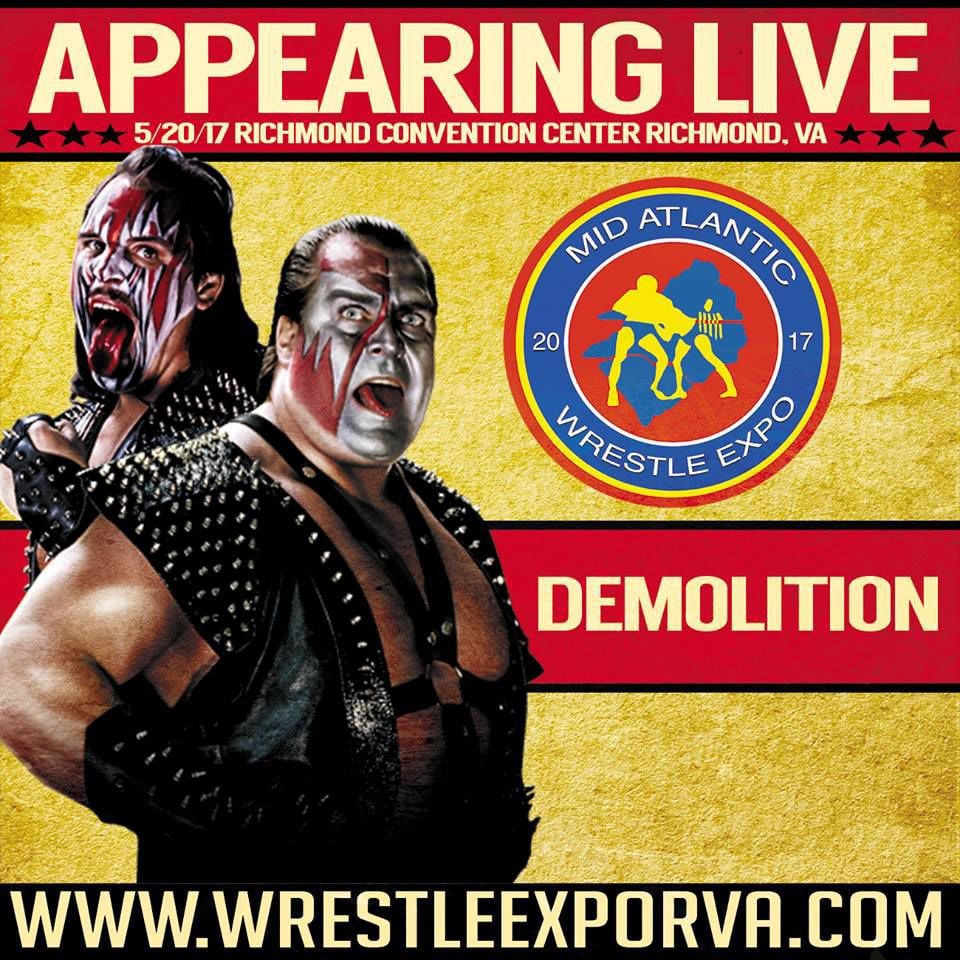 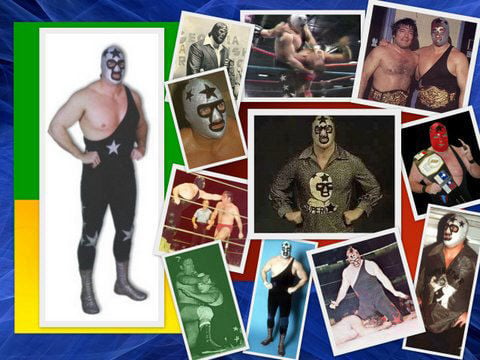 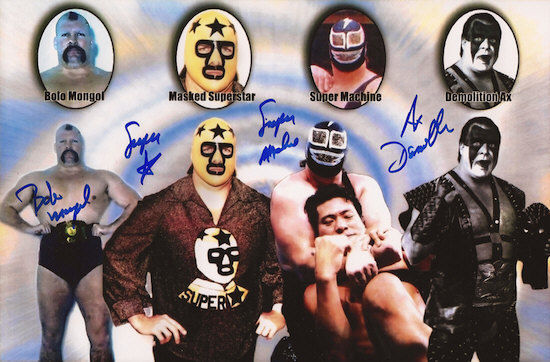 The four faces of Bill Eadie. 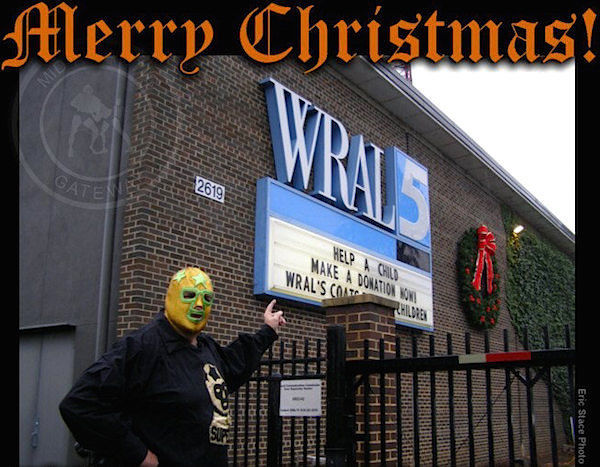 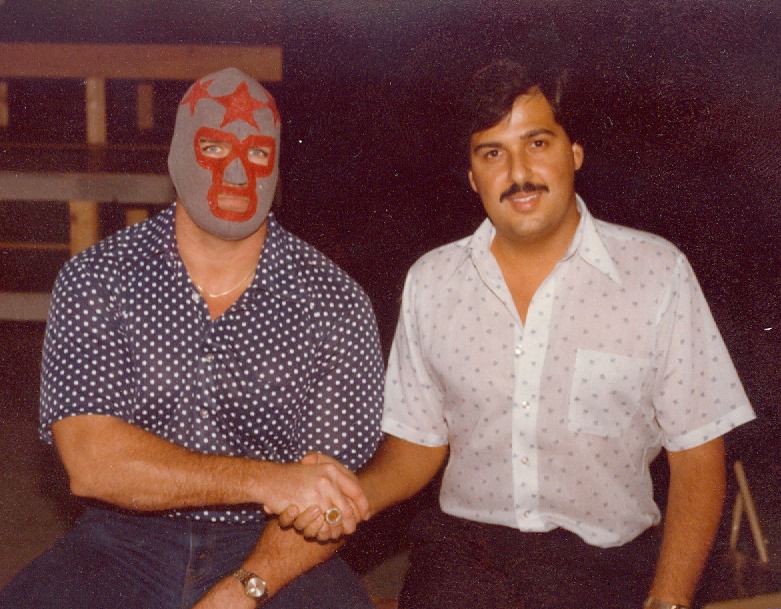 Bill Eadie, left, with George Pantas. Eadie will meet fans during the Mid-Atlantic Wrestle Expo, May 19-20.

The four faces of Bill Eadie.

Bill Eadie, left, with George Pantas. Eadie will meet fans during the Mid-Atlantic Wrestle Expo, May 19-20.

Mid-Atlantic Wrestle Expo is a two-day event that will be held at the Greater Richmond Convention Center, May 19-20, to honor the tradition and history of Jim Crockett Promotions and Mid-Atlantic Championship Wrestling. Up-to-date information is available at http://tinyurl.com/zbuabqd.

Many legends and upcoming stars will appear at the event to help support Veterans dealing with post traumatic stress disorder (PTSD). One of those legends is Bill Eadie, who has wrestled under many aliases including WWE Legend Ax from Demolition, Super Machine, Masked Superstar and Bolo Mongol.

Part one of the interview with Eadie appeared in the Jan. 26 issue of the Flagship and is available here: http://tinyurl.com/h24erg7. This is part two.

Yiorgo (Y): What can the fans expect to see at the Mid-Atlantic Wrestle Expo?

Bill Eadie (BE): We are working very hard to make sure the fans have the opportunity to meet with many of their childhood hero’s and villain’s and see some of the rising stars of tomorrow with the featured wrestling matches of the evening. As with me, throughout the weekend the fans will get to see me as myself, Bill, but also as Ax from Demolition and don’t be surprised if the Masked Superstar makes an appearance. I only have a couple of those masks left. I am really looking forward to talking with the fans, taking pictures and share memories. Years ago, we could not do that. It’s great to finally be able to give back. They come up to me and tell me stories. It is very humbling to me to know that I made an impression on somebody and after so many years later, it’s just like yesterday, and that’s very nice.

Y: Can you share a memory or two you have from doing the Norfolk-Richmond loop?

BE: I’ll give a very, very true memory I have of Norfolk in particular. For some reason it was difficult to get in and out of the Scope, it was easy to go the wrong way all the time you would go around and around the building and finally you would find your way to the highway. In Richmond, I’ll never forget, I was working against Blackjack at the time and I ran in one of his matches against John Stud. John and I started working on Mulligan. A fan came to the ring, then another then another. We had to fight 4-5 different fans. Two weeks later, I’m in a match with Mulligan, his face is down in a rear chin lock so he is facing down towards the mat, and this guy comes in the ring. Now, you need to know that a couple of weeks before, there we some guys that were stabbed in Richmond. I saw the fan come in and rolled over, but he cuts me at the knee. I jumped out the ring and about five cops beat the living you-know-what out of him. He admitted later that it was an initiation into a fraternity. He had to get in and out of the ring and touch a wrestler without getting hit. Unfortunately for me, about a month later I got stabbed in Richmond. Richmond was a rough place to wrestle.

Y: Wow, I’ve read before about Blackjack, Ole Anderson and Roddy Piper getting stabbed, but I had not heard that about you. I am sorry it happened to you, but thank you for the exclusive. Who were some of your favorite programs that you worked with in this area?

BE: Paul Jones, Igor of course, Blackjack Mulligan, those are the ones that really stand out, I had a long standing feuds with those guys. Also, Paul Jones and I tagged and went against – God rest their souls – Jimmy Snuka and Ray Stevens. Mid-Atlantic was my favorite territory to work in; and of course Georgia. Montreal and Japan were all nice, but Mid-Atlantic is my favorite because that is where I got my first big break as a single. You worked hard, but you made good money there.

Y: As a fan, I remember what a big deal it was when you took off the mask for a few seconds in the ring. Tell us about that.

BE: I had made a promise. I learned this from Wahoo McDaniel, and he was very excited about his heritage. He told me that if you say something, then you’ve got to do it. So you’ve got to be careful with what you say. I did that my whole career. So I had told the people that if I won the single or the tag championship belt I would take off my mask, I did not say I was going to keep it off. I told them, you know I am a man of my word. If I told you I’m going to do something I’m going to do it and so, in this case, when we did win the championship belts I took it off, it builds credibility. But ironically a lot of people did not look when I took it off, they were saying don’t do it, don’t do it. So it was all part of the angle. Protecting the identity was part of the gimmick. I liked my privacy and George Scott the booker was emphatic that I stay in separate hotels, I traveled with myself or with Boris Malenko, ate at separate restaurants, and we never associated with the other wrestlers who went to the clubs. Part of the aura of that character was that no one knew who it was. I had people follow me for miles and miles but I would always have a towel over my head for hundreds of miles. If you got the mask you’ve got to work the gimmick. You have to become the character.

Y: Can you share a story about Andre and Japan? Is it true that you were the first to body slam him?

BE: I was one of the first to body slam him. I know that there were a number of guys he would work with and he would not allow you to slam him. I remember when he told me to slam him I thought he was kidding, he was not light I’ll tell you that. As I said, I was there over 40 times, half as Andre’s partner. One of the funny stories that happen there was that they have small taxi cabs all over the place. All you have to do is wave a dollar and they would stop. I had to have Andre hide in the door way or around the corner and when the cab would stop, I would open the front door, get in and Andre would take up the entire back of the cab. They would try to take off. They did not want him in the cab because they thought it would break down. That happened on a nightly basis.

Y: How about a WWF/E memory?

BE: I started out working for Vince Sr. In the early ‘80s he used to have two tournaments a year in Japan. They had the Madison Square Garden (MSG) tag team tournament and a MSG singles tournament and it was normally in the fall. He would come over and make the presentation. I actually went in as a favor to Andre because of our friendship. I respected Sr. He told you when you were coming in, how much you were going to make and when you would leave. I knew of him of course and he knew me from working the Mid-Atlantic area, but to be honest with you, I was never interested in going to New York. I was content to stay in the south. I was doing very well in the Mid-Atlantic, in Georgia and in Japan. So I had no qualms about proving myself in New York. And realistically at that time, most of the guys were trying to get into Georgia and Mid-Atlantic.

Y: How did Demolition come to be, who approached you, etc.

BE: Randy Colley came up with the basic idea and we tweaked it; it was to protect his identity because he was already there a number of years as Moondog Rex. He came up with the idea of having some type of mask on, take it off, and then because Planet of the Apes were very big then, to have some type of ape mask under that. I said I don’t feel comfortable with that, I don’t think that’s going to work, so we created the paint and, of course, the Road Warriors were big back then, The Powers of Pain were big as well. I don’t think anybody steels anybody’s ideas and they are not going to borrow anything that is not successful. People said we tried to copy them. When Barry Darsow and I got together we never felt that. We felt we were doing our own thing and that we could work with all types of guys big or small.

Y: Tell us about your life now.

BE: I still teach special education. I work with juvenile offenders. I teach a special group called The Focus Group – juvenile offenders who were sexually abused kids and consequently started abusing other kids. I also work with the Make-A-Wish Foundation. I got started with that in Japan and I still sell memorabilia with all of the proceeds donated to Make-A-Wish.

Y: God bless you Bill. Thank you for what you do for all kids and for the kids in us, the fans, thanks for the great wrestling memories.

Yiorgo is a Hampton Road’s Arts and Entertainment, and Sports journalist. A stage, TV and movie actor, he is also an educator, motivational speaker, writer, storyteller, columnist, and is involved in professional wrestling.