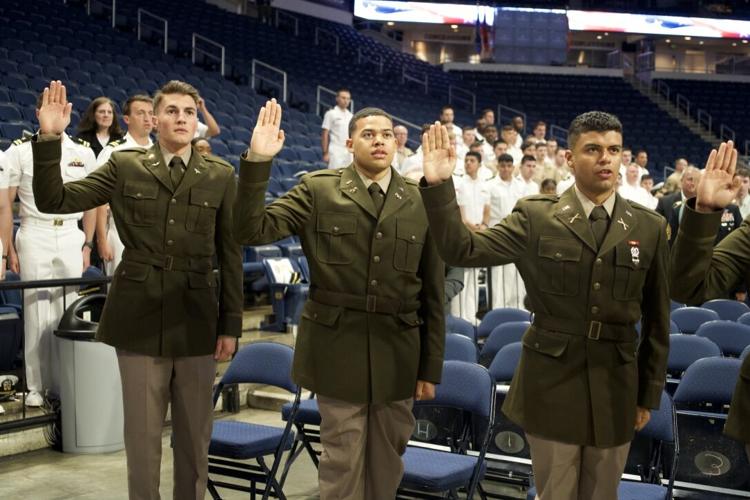 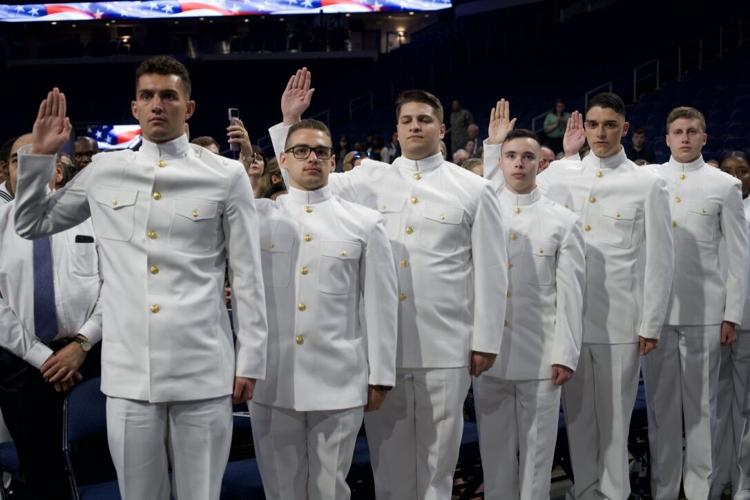 Since the summer of 1982, the Hampton Roads Consortium Naval ROTC Program has provided in-depth training to Midshipmen, producing high quality Navy and Marine Corps Officers. Today, the consortium consists of five schools in the Hampton Roads area — Old Dominion University, Norfolk State University, Hampton University, Regent University, and Tidewater Community College. Students from across the country enroll in these schools and are offered the unique opportunity to participate in an NROTC program at one of the best positioned units in the country. HRNROTC is a short drive to the world’s largest Naval Station and home of our Atlantic Fleet, a Master Jet Base housing the majority of the Navy’s F-18 squadrons, and Little Creek Amphibious Base home to various commands, units and our East Coast SEAL Teams.

Capt. Michael Bratley, Commanding Officer of the Hampton Roads Unit, was greeted by the midshipmen with a standing ovation and cheers. During his address, he spoke about the progress the midshipmen had made, the challenges they will face, and gave them words of advice for the beginning of their new careers.

It was an emotional journey for Bratley, the outgoing Commanding Officer, who started his career in 1985 and ROTC tenure three years ago transferring from the unit in August 2022.

“As my 37 year career draws toward the end, I envy you,” Bratley told the graduates. “I leave here today knowing you will bring great credit to our unit, your uniform, to our Navy Marine Corps Team and to your country.”

Kilby was greeted by the midshipmen and guests with cheers, gave words of encouragement, spoke about the future of the Navy, and the standards and expectations the midshipmen would soon be expected to uphold.

“I am excited for you. When I was you, I was not sure I would make it a career….. if I would fit into the Navy or if the Navy would call me,” said Kilby. “It has been a wonderful journey for me and I hope with every fiber of my being that it is so for you.”

The midshipmen stood tall to take oaths of office to defend the country and don the shoulder boards of Navy ensigns and the gold bars of Marine second lieutenants. They had come a long way since making the same vow as new freshmen four years ago. The sense of excitement was equally intense in the stands, packed with 450 parents, relatives, friends and sponsors who erupted in cheers with the naming of each midshipman during their procession across stage to be greeted to the fleet by Capt. Bratley, Vice Adm. Kilby and ODU President Brian Hemphill.

“After over 35 years in this business, I know that those of us wearing a uniform would not be where we are today without our family and friends. A prior boss of mine often used to say Family Readiness equals Fleet Readiness. This means that we rely on and draw strength from our families and friends,” said Kilby. “You increase our toughness and our resilience to serve our nation at home and aboard. So, to all the families and friends here today, and to those that could not be here, I thank you for your individual and collective roles in supporting our candidates today.”

Midshipman Hanford-Garcia, receiver of the All-Around Performance Award, was one notable graduate to receive his commission and a handshake from Vice Adm. Kilby and other distinguished guests. Now an ensign, Hanford-Garcia, of Palm Beach, Florida, is assigned as a Naval Aviator.

“It was an honor and a privilege to commission and fall in the footsteps of those who served before me, and have my father be my first salute,” said Hanford-Garcia. “I am excited to see where my fellow commissioners will go, and I am proud to see how far they have come in this journey with me.”

As the 2021-2022 academic year comes to a close, the First-Class Midshipmen are preparing to enter the fleet as commissioned officers. The soon-to-be leaders in the fleet have experienced a significant amount of growth throughout their four years in the unit, and the excitement can be seen throughout the Battalion. The seniors will be commissioning into the following communities: Surface Warfare, Aviation, Submarine, and Marine Corps.

After the ceremony and at the cake cutting ceremony which followed, MIDN Trey Rankin, the Battalion Warrior Wardroom President, presented Vice Adm. Kilby a small gift from the graduating class and expressed the group’s sincere appreciation for his participation and guidance. Rankin spoke briefly in celebration of their new commissions and wished his classmates good luck in their new careers.