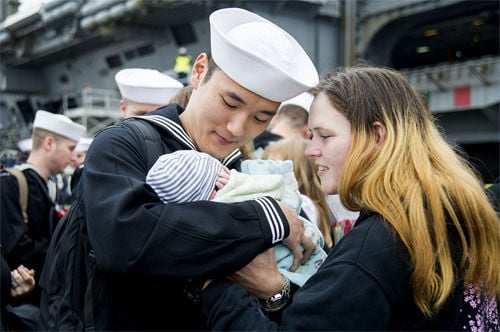 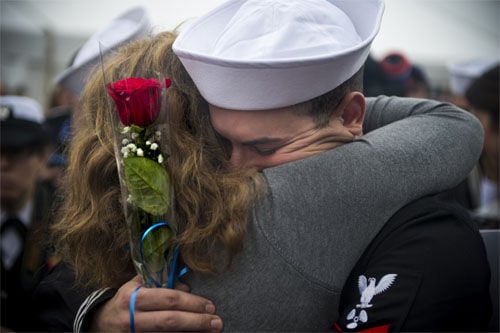 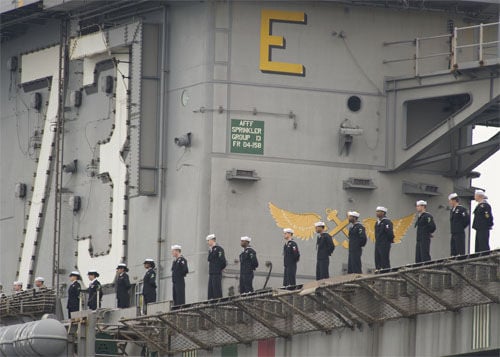 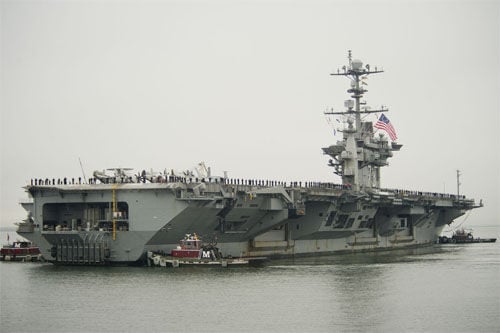 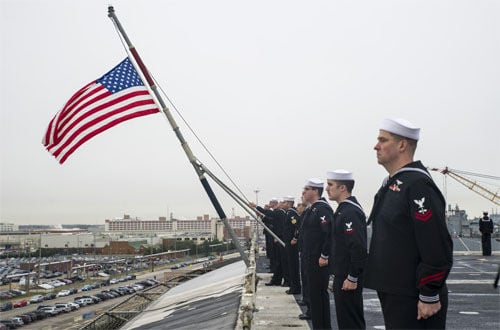 Sailors raise the national ensign on the flight deck of aircraft carrier USS George Washington (CVN 73) as the ship arrives in its new homeport of Naval Station Norfolk. 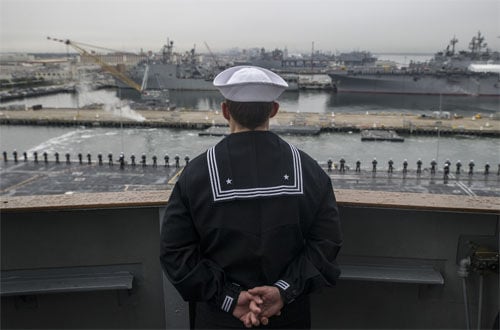 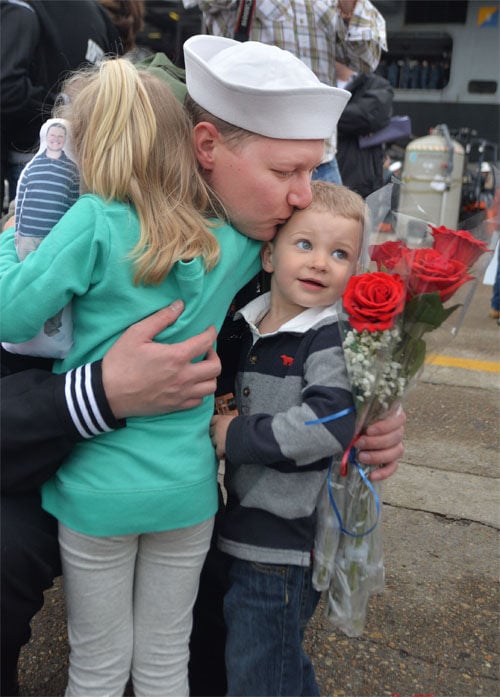 Sailors raise the national ensign on the flight deck of aircraft carrier USS George Washington (CVN 73) as the ship arrives in its new homeport of Naval Station Norfolk.

Washington will return to Newport News Shipbuilding in Newport News, in 2017 for a mid-life overhaul as part of a maintenance plan to sustain the carrier's life span.

"Our crew is excited to return home to their families," Washington’s Commanding Officer Capt. Timothy C. Kuehhas said. "Our homecoming is significant for both our crew members who have been on deployment for many months, and for our ship which is returning home after being forward deployed to Japan since 2008."

In May 2015, Washington departed Japan to participate in Talisman Sabre 2015 with Australia and New Zealand. Washington then proceeded to San Diego for a 10-day crew swap turnover with USS Ronald Reagan (CVN 76) in August 2015.

This crew swap with Reagan was the first part of an unprecedented three-carrier crew swap intended to keep the majority of the carrier and strike group personnel in the same geographic areas to support geographic stability and reduce permanent change of station costs. Key personnel, including the commanding officer, executive officer, and those related to unique systems, remained with their ships. Following Washington's arrival in Norfolk, nearly two-thirds of the crew will return to San Diego and embark USS Theodore Roosevelt (CVN 71).

"A three-carrier crew swap is certainly a complex evolution," Kuehhas said. "It was well planned by the staff of Naval Air Forces and well executed by the deckplate leaders of the three ships. The crew of Washington will now focus attention on local operations in 2016 as the ship will serve as the training platform for the qualification of student naval aviators heading to fleet squadrons."

Washington departed the southern California operating area after conducting underway training and deployed in U.S. 4th Fleet as part of Southern Seas 2015 which enhanced interoperability, increased regional stability and built and maintained relationships with countries throughout the region through joint, multinational and interagency exchanges and cooperation with 15 partner nations.

"This was the largest and most capable U.S. force to participate in UNITAS in the more than 50-year history of the exercise," Commander of Carrier Strike Group 9 Rear Adm. Lisa Franchetti said. "And although UNITAS was the major focus for our Southern Seas 2015 deployment, Washington and Carrier Air Wing 2 offered the unique opportunity to extend our engagements beyond UNITAS, with passage-at-sea exercises, three bi-lateral exercises with air forces in the region and 19 C-2 flights that brought distinguished visitors from nine countries out to the carrier for a half day visit."

Washington hosted more than 2,000 distinguished visitors during Southern Seas 2015. During port visits to Peru, Chile and Brazil, guests were also invited to the ship where they received guided tours given by the crew.

"George Washington Strike Group's Southern Seas 2015 deployment was a resounding success," Franchetti said. "It demonstrated our continued commitment and enduring relationships with our partners in the region, while providing a unique opportunity to collaboratively exercise our skills in an increasingly challenging maritime environment."

Additionally, during Southern Seas 2015, 447 Sailors were selected to advance to the next higher paygrade, including 42 advancements to chief petty officer. Washington's crew also earned more than 1,700 warfare pins during this deployment.

"This is proof that we have great people working with us and I'm very proud of all the things we've been getting done," Washington’s, and formerly Reagan’s, Senior Enlisted Advisor Command Master Chief Franklin "Spike" Call said. "People didn't waste time. We have good, solid, honest Sailors qualifying for warfare pins, and to do that in conjunction with meeting the ship's demanding mission is just a staggering accomplishment."

For some of the crew members aboard Washington, this is the first time coming home to the U.S. in a long time.

"This ship stood the watch overseas for almost eight years and now is honorably returning home with a great crew that's come together as a family," Call said. "With new people working together [as a result of the hull swap], it takes a tremendous amount of patience to get to a place where you can come together and do great work. Out of all the things we've accomplished, the thing that I am most proud of is this family coming together so fast as a solid unit to get done what needed to get done."