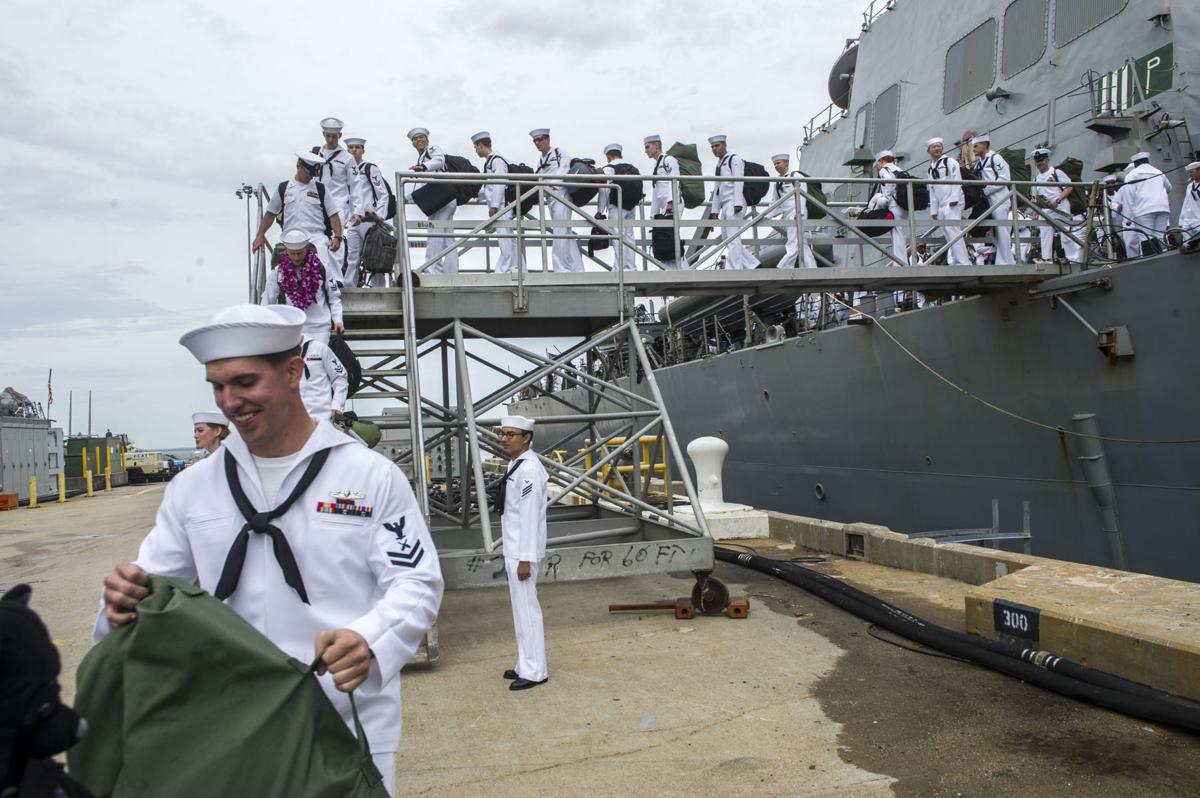 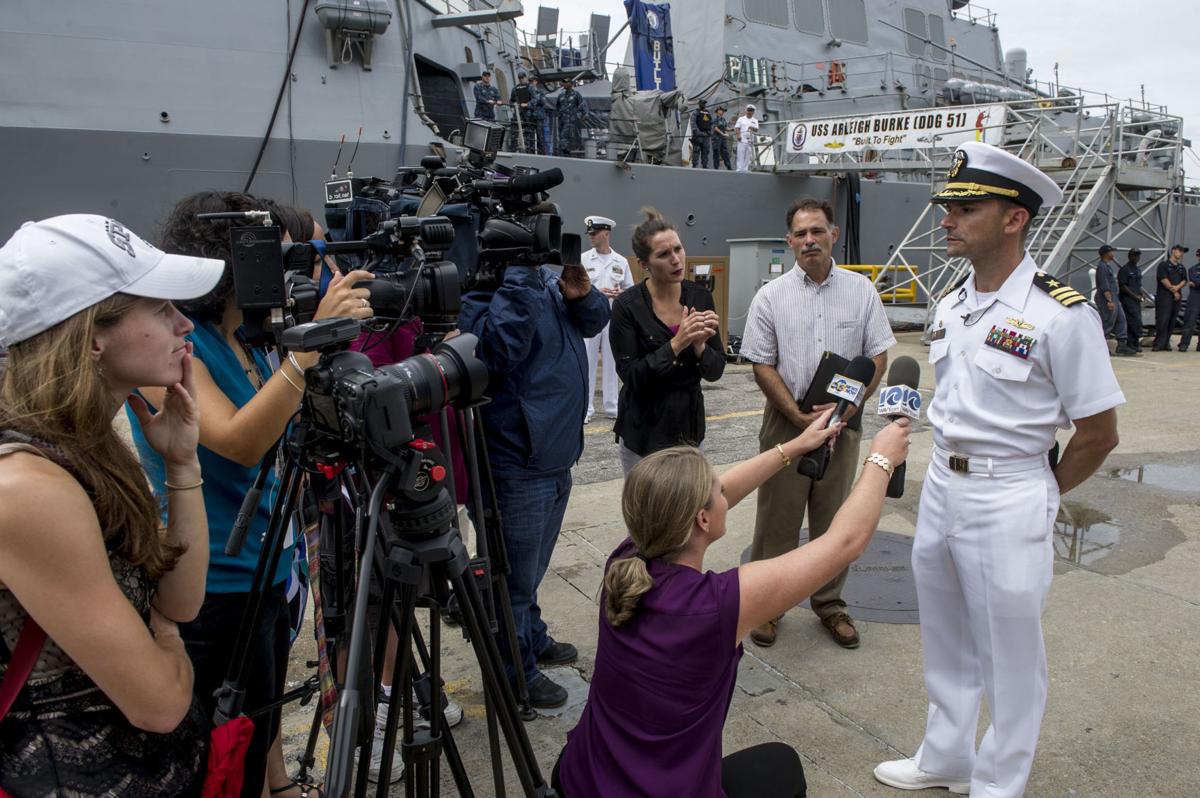 Cmdr. Marc Davis, commanding officer of the guided-missile destoryer USS Mahan (DDG 72), speaks to local media after the ship returned from a 7-month deployment from the 5th Fleet area of operations. The ship’s crew conducted 24 Strait of Hormuz transits, 25 replenishment-at-sea and 50 weapons exercises along with 53 small boat operations in support of maritime security operations in the theater.

Cmdr. Marc Davis, commanding officer of the guided-missile destoryer USS Mahan (DDG 72), speaks to local media after the ship returned from a 7-month deployment from the 5th Fleet area of operations. The ship’s crew conducted 24 Strait of Hormuz transits, 25 replenishment-at-sea and 50 weapons exercises along with 53 small boat operations in support of maritime security operations in the theater.

“I couldn’t be more proud of the crew – they set the standard for excellence and established a great reputation for themselves out here,” Davis said. “The successes they achieved were impressive, and the crew overcame every challenge they met with poise and precision.”

“The majority of the world’s commerce moves by way of the sea,” Executive Officer of USS Mahan Cmdr. Emily Wall said. “We ensured safety and freedom of navigation through theater security operations and working with our maritime partners.”

While in 5th Fleet, the crew participated in a tri-lateral defense exercise with the Iraqi and Kuwaiti Defense Forces. In addition to practicing core skills, the event also served as an opportunity to grow and foster partnership and cooperation between the two navies. Mahan also participated in joint naval exercises and operations with France, Great Britain, Australia, Denmark and other NATO partners, highlighting the importance of working with coalitions to preserve the Sea Lines of Communication.

For one Sailor it was the journey that was the most satisfying.

“My favorite part of deployment was getting my Enlisted Surface Warfare pin; I got to see how the ship really comes together to work as a whole,” Gunner’s Mate 3rd Class Emmanuel Tejada said. “It was also great to see the other countries during port visits. Experiencing other cultures really opened my eyes to the other areas and what living is like in other parts of the world.”

Another Sailor anxiously endured the hours as homecoming drew near looking forward to when he would be reunited with his spouse and see his daughter for the first time.

“Her name is Anahyah Branch and she was born December 5,” Culinary Specialist 1st Class Marcus Branch said. “I am definably excited to see her and my family. But at the same time I have a little anxiety. I will be coming home a stranger to her.”

While in theater, the ship made port visits in Portugal, Greece, Bahrain, UAE, Saudi Arabia, Cyprus and Spain where the crew enjoyed liberty, conducted maintenance on the ship, and participated in numerous community relations projects.

“The crew returns from deployment with heads held high,” Command Master Chief Jan Rega said. “Each Sailor went above and beyond to hone their individual skills while operating as a cohesive unit. These efforts greatly contributed to us achieving our ultimate goal of a safe and successful deployment.”

Mahan is the 5th ship named after Rear Adm. Alfred Thayer Mahan, a naval theorist on sea power whose book The Influence of Sea Power Upon History 1660-1763 shaped naval strategy to this day.

With “Built To Fight,” as its motto, the ship was commissioned in 1998 as the 21st Arleigh-Burke-class destroyer, and the first Flight II-variant of the class. She carries a complement of 236 Sailors and 29 Officers.

Reflecting on his 19 years of Naval service, Davis said that this, his 7th deployment, was by far his favorite. “It truly is an honor to lead these incredible men and women.”

The USS Mahan returned to Naval Station Norfolk Tuesday, June 20, 2017, after being deployed for seven months in the Middle East and Mediterranean.