Naval Medical Center Portsmouth (NMCP) held a ceremony to honor the returning service members attached to the hospital ship USNS Comfort (T-AH 20) from the recent deployment to the Caribbean, Central and South America, on Jan. 10.

The ceremony was held to celebrate a successful mission and to highlight the NMCP Sailors that made it happened. During the invocation, Lt. Cmdr. Diego Londono, a chaplain at NMCP, celebrated all the deployers, saying that they were not only warriors, they were healers as well.

“This celebration is a big pause in our command, each of you are important,” Londono said. “You have changed many lives without even realizing that you have changed your life as well, in many different ways. This is an opportunity to take a breather, let’s take that breath, deep breath. As we do that, let’s bring our memories back. You brought so much joy and laughter to the people you encountered that left an imprint in your souls.”

Capt. Lisa Mulligan, NMCP’s commanding officer, spoke highly of the individuals who deployed with Comfort about the difference that they made in the 12 countries they visited.

“You provided a level of healthcare and capability to many people who have never had the benefit to receive before,” Mulligan said. “Some of the things you have done has made a permanent change in their lives. You made a big contribution to our national defense. Your great work has shown what the United States has to offer, and you represented us very well.”

“It’s an important symbol of the binding ties between loved ones that wore them or were displayed by women to remember their men who were serving overseas,” Diamond said. “Yellow ribbons became a symbol of support during 2003 Iraq invasion, as well as deployments of the troops in Afghanistan and other countries around the world.”

The ceremony concluded with NMCP leadership socializing with the Comfort returnees while enjoying coffee and pastries provided by the NMCP galley staff. 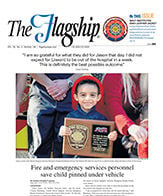