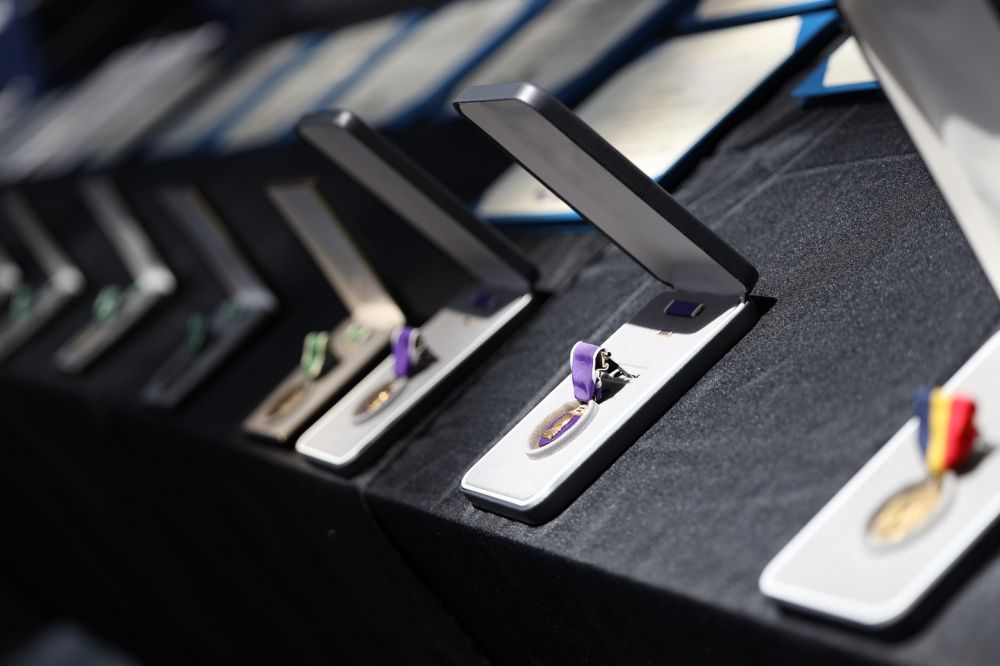 Medals were displayed prior to being awarded to 12 service members and federal servants, who were recognized for their bravery and selflessness during the Dec. 6 shooting at Naval Air Station Pensacola, Florida. 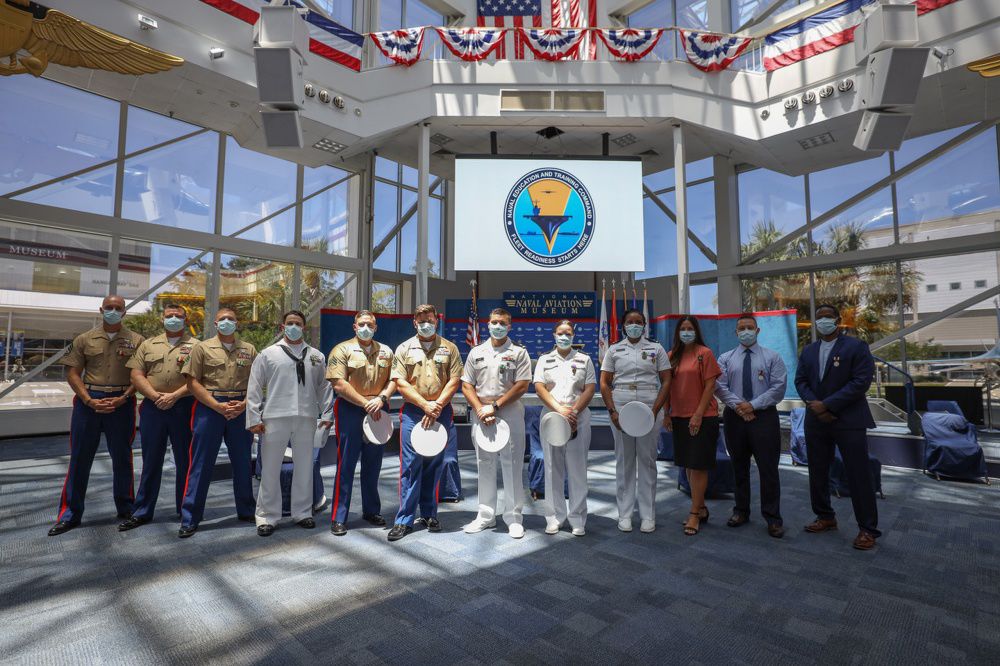 Twelve service members and federal servants were recognized during an awards ceremony for their heroic and selfless actions during the Dec. 6 shooting at Naval Air Station Pensacola, Florida.

Medals were displayed prior to being awarded to 12 service members and federal servants, who were recognized for their bravery and selflessness during the Dec. 6 shooting at Naval Air Station Pensacola, Florida.

Twelve service members and federal servants were recognized during an awards ceremony for their heroic and selfless actions during the Dec. 6 shooting at Naval Air Station Pensacola, Florida.

The ceremony recognized the bravery and selflessness of service members and federal civil servants involved in the Dec. 6 shooting at NAS Pensacola, which left three dead, (not including the shooter) and eight injured.

“The Sailors, Marines, and civilians recognized for their response to this horrific act represent the strength and resiliency of our military,” said Nowell. “These individuals ran towards danger and put themselves in harm’s way, selflessly risking their lives. They demonstrated toughness, trust and connectedness to our Navy and Marine Corps family and I’m proud to call each of them a shipmate.”

Twelve civilians and service members from NASC and Marine Aviation Training Support Group (MATSG) 23 were recognized during the event for their actions.

“It’s still hard to comprehend how something like this could happen here at NAS Pensacola, but it did happen, and I remain in awe at how those we honored here today responded,” said Cozad. “It’s a testament to the service that they were all called to when every one of them, military and civilian, raised their right hand and swore an oath to our nation. None of them came to work that day expecting to face the unimaginable, but they all know firsthand what it means to do what needs to be done in the face of adversity and to sacrifice for each other and our country.”

Airman Apprentice George Johnson and Jessica Pickett will receive their awards in separate ceremonies. Johnson, who transferred from NASC, will receive the Navy and Marine Corps Commendation Medal and Purple Heart. Pickett, who was unable to attend the ceremony, will receive the Secretary of Defense Medal of Freedom Award.

For all in attendance, the ceremony was also a reminder of those who lost their lives on Dec. 6 and what it meant to their families and friends.

“I joined the Navy to be a rescue swimmer knowing that one day my number might be called to save someone. I wish it had not been under these circumstances. At the end of the day, I did what I did and I would do it again without skipping a beat,” said Naval Air Crewman (Helicopter) 2nd Class Carl Daniel, a Naval Aircrew Candidate School instructor, who was awarded the Purple Heart and Navy and Marine Corps Commendation Medal for providing first aid to critically wounded personnel at the scene. “I hope the loved ones of the deceased are doing well and that they can rest assure that we have the watch.”

"It's great that we are all being recognized for our actions, but I feel that we did what any other Marine or Sailor would do when put in the same situation," said Staff Sgt. Andrew J. Pfannenstiel, an instructor at MATSG-23, who was awarded the Navy and Marine Corp Commendation Medal for delivering medical supplies and assisting others in treating wounded personnel.

NETC recruits and trains those who serve our nation, taking them from “street to fleet” by transforming civilians into highly skilled, operational, and combat-ready warfighters, while providing the tools and opportunities for continuous learning and development.