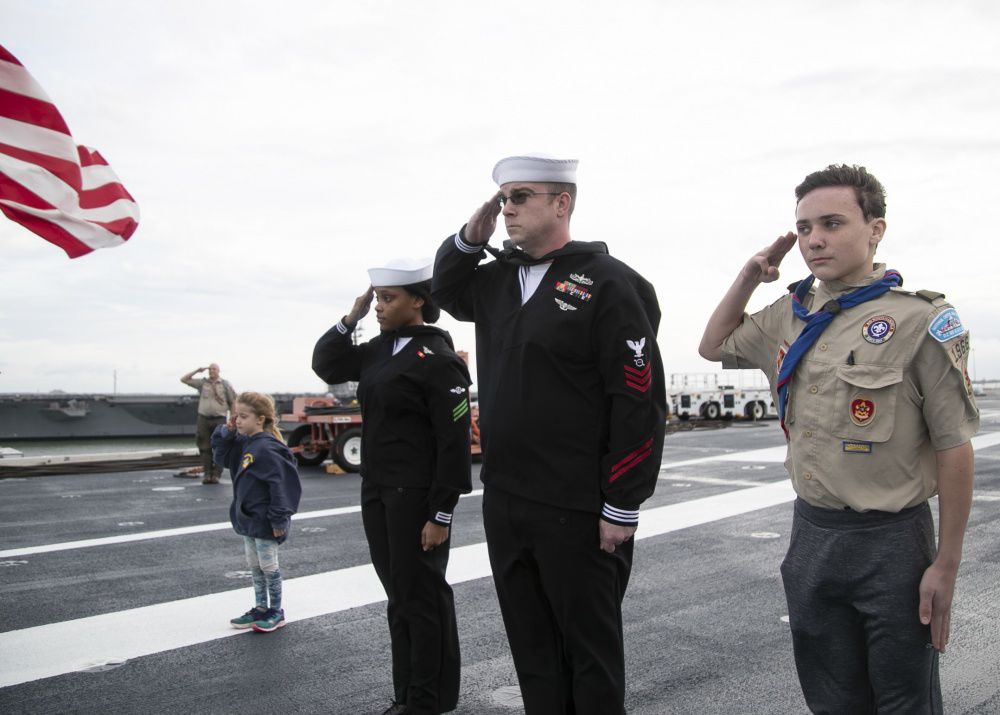 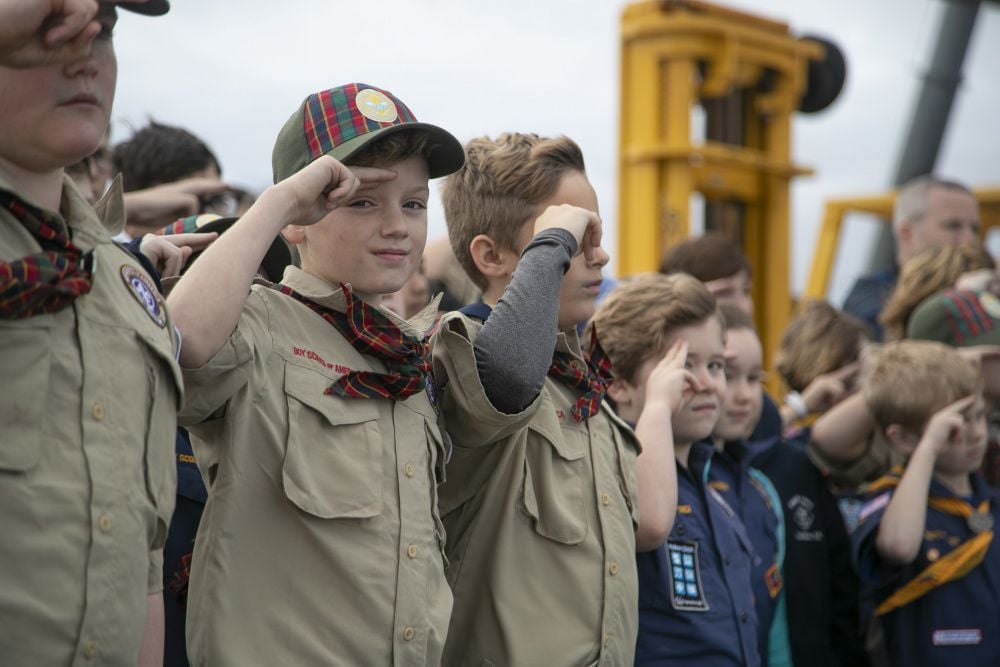 The scouts enjoyed a full day of activities aboard Ford on the 11th while touring the ship, interacting with Sailors and learning about the daily life onboard the first Ford-class carrier. Additionally, the scouts returned the morning of June 12 to observe and assist with morning colors.

President Ford was a life-long supporter of the Boy Scouts organization and is the only U.S. president who achieved the rank of Eagle Scout, which made it appropriate that the ship bearing his name hosted this event for the Boy Scout troop.

“Our troop has visited several of the historic naval ships up in the Baltimore area, but this was our first time visiting an aircraft carrier, and we’ve been looking forward to it,” said Michael Stonkey, Troop Leader for Boy Scout Troop 1966. “The fact that President Ford was the only president to attain the rank of Eagle Scout factored heavily into our decision to pursue a visit to this particular ship. We’re very excited that we were able to spend the day here, to see how his ship operates day-to-day.”

Susan Ford Bales, daughter of President Ford and the ship sponsor, commended the Boy Scout troops via a personal letter for their service to the community.

“Your visit represents a special confluence of two parts of dad’s life about which he was so proud — his naval service as a Lieutenant Commander in World War II and his service as a Boy Scout who achieved the rank of Eagle Scout,” said Ford Bales in her letter. “My sincere hope is that in the years ahead, you will experience as Boy Scouts the same pride and joy as did a young boy from Grand Rapids, Michigan who went on to become the 38th president of the United States.”

“Given President Ford’s involvement in the Boy Scouts and the personal impact it had on him, I’m sure he would be proud to see us fostering a relationship and providing this opportunity for Boy Scouts to experience life aboard a Ford-class aircraft carrier,” added Lt.j.g. Nicholas Spaleny, from Kalamazoo, Michigan, Ford’s assistant public affairs officer, and organizer of the visit.

During their visit, the scouts and their parents visited the ship’s flight deck, forecastle, pilot house, a repair locker and other key locations to learn more about the inner workings of some of the ship’s most important areas and requirements.

The scouts also had an opportunity to eat with the crew and get a first-hand look at life aboard Ford.

“It was neat to tour the ship and see how everything works,” said Ethan Talbot, a Life Scout from Fairfax, Virginia. “There are some really cool similarities between the Navy and the Boy Scouts, such as rank structure and how everyone has a unique role that they play. I enjoyed learning more about that while we were here.”

Aviation Boatswain’s Mate (Equipment) First Class Nathan Buckley, from Rutherfordton, North Carolina, served as a tour guide during the Boy Scouts’ visit and said he enjoyed the visit because the ship doesn’t often get groups of young visitors who showed such a strong interest in his job.

“I had a blast taking the scouts around the ship, and watching them explore the flight deck in particular, because that’s my world up there,” said Buckley. “Getting to share my passion and show the next generation my passion may help to inspire some of them to follow in my footsteps, or at the very least, search for what they themselves are passionate about. It's fun to see the wonder in the kids’ eyes as they explore the ship and see things that cannot be found anywhere else in the world.”